Not exactly what this team planned at the beginning of the season.

Driskel threw for 209 yards and two touchdowns, and Scarbrough scored in his NFL debut, but despite a decent day from that no-name offense, the Lions lost 35-27 to the Cowboys on Sunday. Detroit has now lost six of its last seven games. Injuries to Matthew Stafford and Kerryon Johnson have hurt, but it was the defense that came up short against Dallas.

“I feel like we just need to be consistent in everything we do,” linebacker Devon Kennard said. “I feel like last week we came out and played one of our better games defensively overall, and we needed to build on that and not take a step back. Defensively, I think we took a step back today.”

Stafford missed a second straight game with back and hip problems. The Lions lost 20-13 at Chicago with Driskel at quarterback, but the offense looked sharper against Dallas. 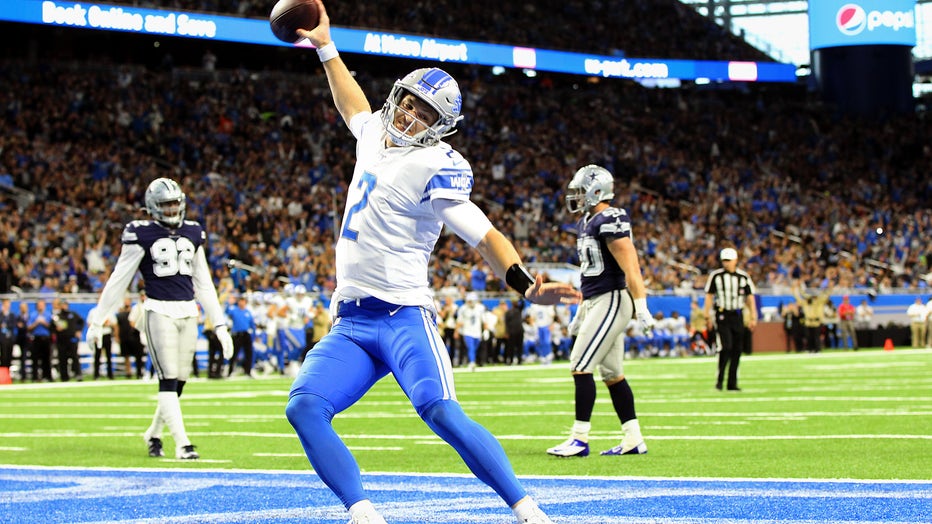 Detroit Lions quarterback Jeff Driskel (2) makes a touchdown during the first half of an NFL football game against the Dallas Cowboys in Detroit, Michigan USA, on Sunday, November 17, 2019. (Photo by Amy Lemus/NurPhoto via Getty Images)

Driskel finished with a passer rating of 109.3 for the game, and he also ran for 51 yards on eight carries. His mobility was a plus for Detroit, which trailed for the entire second half but was in the game at the end.

“Getting the reps during the week helps. Those guys hearing my cadence, things like that, getting in and out of the huddle - the more you do it the more comfortable you’re going to be,” Driskel said. “We can still clean some things up. We had a couple of penalties and that’s kind of what set us back at times. Overall, I thought it was definitely cleaner than last week.”

Scarbrough, signed off the practice squad, made his NFL debut and scored the game’s first touchdown on a 5-yard run just 2:27 into the game. He ran for 55 yards on 14 carries.

“Everybody needs an opportunity. It felt regular to me,” Scarbrough said. “Playing under coach (Nick) Saban (in college) - this is what we’ve always done. Every week was a different guy up, so you just have to be ready when your number is called.”

Scarbrough’s touchdown came after the Lions had a short field following a Dallas fumble. That was the only real highlight for the defense. Dak Prescott threw for 444 yards and three touchdowns for the Cowboys, who were 8 of 14 on third down.

Penalties hurt Detroit as well. After Dallas scored a touchdown in the second quarter, the Lions were called for 15-yard infractions on both that play and the ensuing extra point. Both were enforced, leading to the unusual spectacle of the Cowboys kicking off from the Detroit 35. Dallas took advantage, using a squib kick that forced the Lions to start at their 15.

Late in the fourth quarter, with the Lions down by eight, Detroit reached the Dallas 32. Then the Lions were flagged for an ineligible man downfield. After an incomplete pass, a sack and another incompletion, Detroit lined up to punt on fourth-and-26 and was called for delay of game, bringing up fourth-and-31.

With two timeouts remaining, the Lions punted, and they never got the ball back.