DETROIT - Detroit Lions quarterback Matthew Stafford seems to be a step closer to missing another start.

Stafford did not practice with teammates Wednesday, a few days after hip and back injuries stopped his streak of 139 consecutive starts counting the playoffs.

Stafford watched as quarterbacks Jeff Driskel and David Blough took snaps. Later in the day, Driskel said he was simply preparing to play as he does each week. 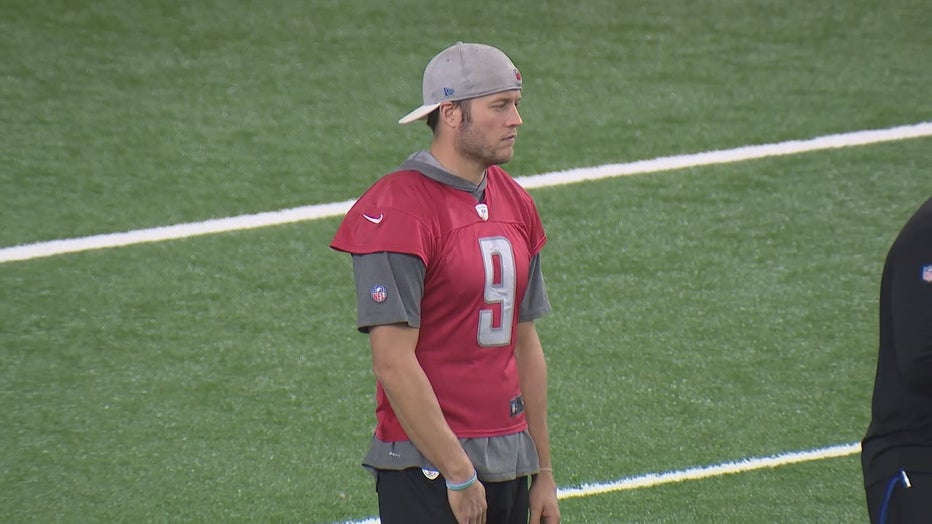 “I’d say the biggest difference for me is all you guys standing around my locker,” he said while surrounded by reporters.

Driskel played in place of Stafford in a 20-13 loss to Chicago, giving Detroit its fifth loss in six games. He was 27 for 46 for 269 yards - all career highs - with a touchdown and an interception in his sixth career start.

The Lions (3-5-1) host the Dallas Cowboys (5-4) on Sunday, when Driskel is expected to get another chance to start.

Stafford has not been ruled out against Dallas, his hometown team. Stafford insisted earlier in the week he’s going to do everything he can to play.

“That’s just something that’s kind of going to be a decision probably week to week on whether or not I can make it out there,” he said. “But I’m going to do everything I can to try and be out there as soon as possible.”

Potentially looking to add depth at the position, the Lions will be among the NFL teams planning to attend Colin Kaepernick’s workout for NFL teams on Saturday.

Detroit coach Matt Patricia said someone from general manager Bob Quinn’s staff will be in Atlanta to evaluate Kaepernick. Kaepernick hasn't played since the 2016 season with San Francisco. He helped start a wave of protests about social and racial injustice that season by kneeling during the national anthem at games.

Patricia was an assistant coach when Kaepernick led San Francisco to a win over New England in 2012 and four years later when the Patriots beat the 49ers.

“Just thought he was very athletic, especially the first time we played against him,” Patricia said.

Patricia, though, declined to say if he thinks Kaepernick can still play in the NFL.