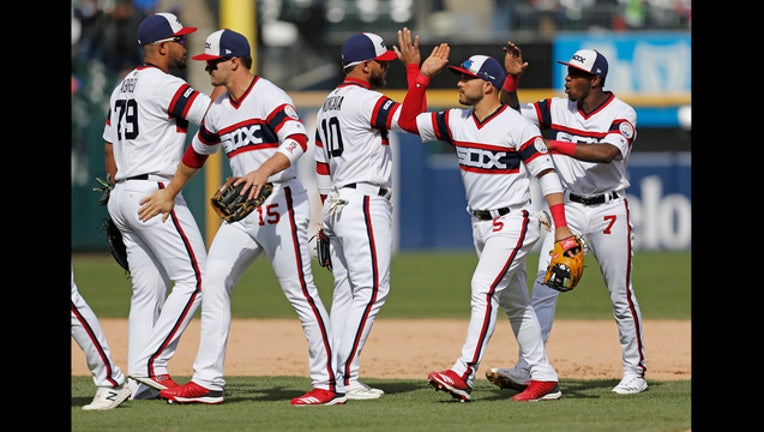 Sunday was not one of those days for the 25-year-old right-hander.

López struck out a career-high 14 and allowed two hits in six innings to lead the Chicago White Sox to a 4-1 victory over the Detroit Tigers for a sweep of their abbreviated two-game series.

"He knew he was commanding his fastball and he was aggressive with all his pitches," catcher Welington Castillo said of López. "It didn't matter who was in the batter's box."

Jace Fry and Kelvin Herrera each worked a hitless inning, and Alex Colomé got the final three outs for his fifth save.

The White Sox struck out 20 times - Fry, Herrera and Colomé had two each - to tie the major league record for a nine-inning game.

"It tells you they had great stuff," Tigers manager Ron Gardenhire said. "Guys (were) in a lot of bad hitting situations, and we didn't put the ball in play. One of those tough games."

López's strikeout total was the most by a Chicago starter since Chris Sale struck out 14 against Seattle on Aug. 26, 2016.

Castillo went 2 for 4 with two RBIs, Leury García and Yolmer Sánchez each drove in a run and Jose Abreu went 2 for 3 as Chicago won its second straight.

Grayson Greiner had a run-scoring single for Detroit, which has dropped four straight.

"His stuff was pretty electric," Greiner said of López. "Some days you can kind of eliminate one of his pitches, and he had everything going today. He had a fastball I think up around 98, and he was throwing his curveball and slider down and away and mixing his changeup in there.

"He had elite stuff today, and he threw the ball well."

The White Sox had a wild 12-11 win on Friday night in the opener. Saturday night's game was postponed because of snow.

Detroit's only run came in the second. With two out and none on, Ronny Rodríguez reached on an error by shortstop Tim Anderson. Rodríguez stole second and scored on Greiner's single.

López walked two batters in the sixth, but then struck out Brandon Dixon to cap his strong outing.

The White Sox grabbed a 2-0 lead in the first on a two-out, ground-rule double by Castillo with the bases loaded against Matthew Boyd (2-2).

Chicago added insurance runs in the seventh and eighth. García drove in a run with a safety squeeze bunt in the seventh, and Sánchez had a sacrifice fly in the eighth.

Tigers: 2B Josh Harrison was scratched with a left shoulder contusion. He was injured diving for a grounder in Friday's game.

White Sox: Rookie Eloy Jiménez was placed on the 10-day injured list Sunday with a high right ankle sprain. The 22-year-old was injured when he crashed into the left-field wall on Friday night trying to catch a home run by Greiner in the third inning. Jiménez is likely to be sidelined for a month or longer. "He'll be reevaluated in a couple of weeks, and then we'll see where he's at," Renteria said. ... The White Sox also placed right-handers Nate Jones (right elbow inflammation) and Ryan Burr (right shoulder inflammation) on the IL and recalled LHP Aaron Bummer and RHP Thyago Vieira from Triple-A Charlotte.