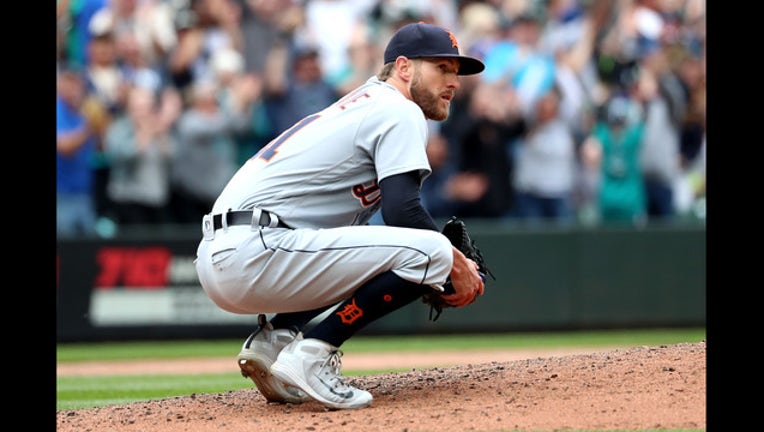 SEATTLE, WA - MAY 20: Shane Greene #61 of the Detroit Tigers reacts after giving up a two run home run to Mitch Haniger #17 of the Seattle Mariners in the ninth inning to tie the game at Safeco Field. (Photo by Abbie Parr/Getty Images)

SEATTLE (AP) - Mitch Haniger hit a tying two-run homer in the ninth inning and Jean Segura's RBI single in the 11th gave the Seattle Mariners a 3-2 victory over the Detroit Tigers on Sunday.

Minnesota starter Francisco Liriano took a no-hitter into the seventh but closer Shane Greene blew his third save of the season, giving up Haniger's 11th home run on an 0-2 pitch with one out.

Second baseman Dee Gordon led off the 11th with a single against Buck Farmer (0-3), stole second, then scored on Segura's single down the right-field line. Nick Vincent (2-1) struck out two in his one inning for the win.

Liriano attempted to become the first Tigers pitcher not named Justin Verlander to throw a no-hitter since 1984, but Haniger's line drive single with one out in the seventh ended his run at history. The lefty already has one no-hitter to his belt, blanking the White Sox while walking six in a 1-0 win on May 3, 2011, as a member of the Minnesota Twins.

Haniger reached on a two-out walk in the first inning, one of two in the inning for Liriano, before 17 straight Mariners failed to reach base.

A one-out walk by third baseman Gordon Beckham in the eighth appeared to end Liriano's night. Liriano held out the ball for manager Ron Gardenhire as he walked out for a mound visit, but stayed in and struck out pinch-hitter Mike Zunino and shortstop Alex Romine to end his night, finishing with five strikeouts and three walks over 102 pitches.

First baseman John Hicks provided Detroit with its only offense, launching a 1-1 pitch from Seattle starter Wade LeBlanc deep into the left-field bullpen with two outs in the first for his fifth home run of the season. LeBlanc quickly retired the first two batters of the game before a single by Nicholas Castellanos set up Hicks' second homer of the season against his former team.

LeBlanc lasted 5 1/3 innings before a single by catcher James McCann with one out in the sixth ended his day. He gave up seven hits while striking out five with no walks.

Tigers: RHP Jordan Zimmermann (shoulder) is expected to throw a bullpen session this week and could follow with a rehab appearance as long as there are no setbacks. 1B Miguel Cabrera took batting practice Saturday in his first on-field action since a hamstring strain earlier this month.

Mariners: DH Nelson Cruz got the day off Sunday to rest soreness in his foot and elbow and is expected to return when the Mariners open against the Athletics on Tuesday.

Mariners: Mike Leake (4-3) will start Tuesday when the Mariners begin a three-game series against Oakland. Leake is riding a two-game winning streak and has lasted five or more innings in each of his last four starts.