Michigan's game against Maryland was canceled after the Wolverines suspended team activities Wednesday because of an outbreak of COVID-19 that could also threaten their rivalry game against Ohio State on Dec. 12 and the Buckeyes' chances to play for a Big Ten title.

Michigan has paused in-person football activities until at least Monday. 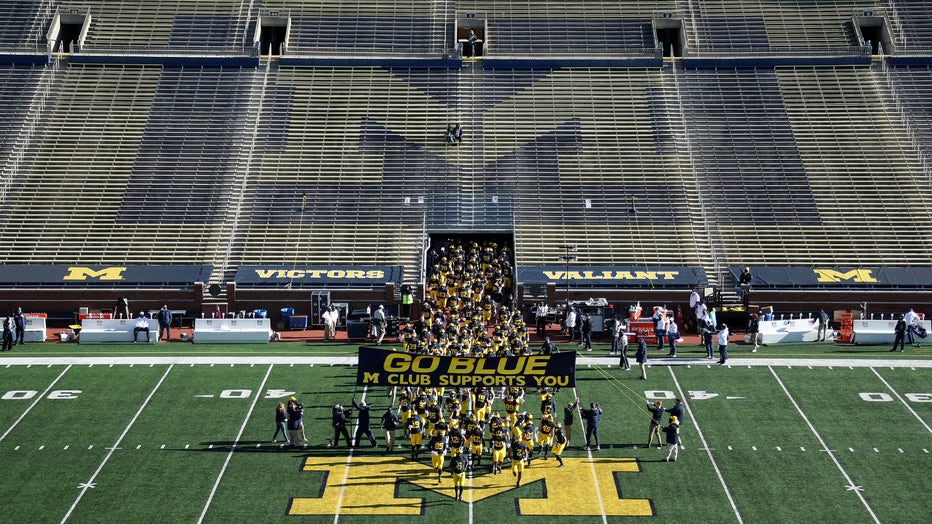 "The decision ... was made with the health, safety and welfare of the student-athletes, coaches and staff as our utmost priority,” Michigan athletic director Warde Manuel said. “We have seen an increase in the number of student-athletes unavailable to compete due to positive tests and associated contact tracing.”

Ohio State had to cancel its game last week at Illinois because of a spike in COVID-19 cases in its program. It was the second game the Buckeyes (4-0) have lost from their regular-season schedule. One more would leave them unable to reach the conference-mandated minimum to be eligible for the Big Ten championship game.

Ohio State said the Buckeyes had resumed in-person football activities Tuesday, an encouraging sign that they will be able to play at Michigan State on Saturday.

But now the Michigan game is in danger.

This is the third time Maryland (2-2) has had a game canceled this season. Matchups against Ohio State and Michigan State were wiped out last month after the Terrapins had 23 positive tests for COVID-19, including head coach Michael Locksley.

Maryland has played only one game since defeating Penn State on Nov. 7, losing last week at Indiana. The Terps are scheduled to wrap up the regular season next Saturday at home against Rutgers.

The Mid-American Conference announced it Kent State at Miami scheduled for Saturday would not be played because of roster issues related to the virus at Kent State.

So far six games scheduled for this weekend have been postponed or canceled, including Washington State at No. 17 Southern California, which was pushed back two days from Friday to Sunday.

In the previous three weeks, 52 games were canceled or postponed, about 29 percent of what was scheduled.

Mississippi also suspended team activities in football Wednesday, though the Rebels have an open date this weekend.

Coach Lane Kiffin said the team could return to the practice field after as little as a one-day hiatus.

“We’d be able to play as of right now, with no more” positive tests, Kiffin said.

The Rebels still have games to make up against Texas A&M and LSU.