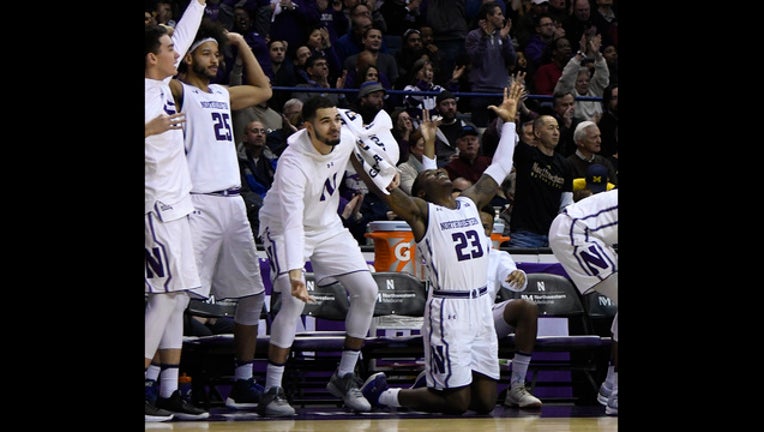 ROSEMONT, IL - FEBRUARY 06: The Northwestern Wildcats bench reacts to a basket against the Michigan Wolverines during the second half on February 6, 2018 at Allstate Arena in Rosemont, Illinois. (Photo by David Banks/Getty Images)

ROSEMONT, Ill. (AP) - Maybe it was too soon to write off Northwestern.

The Wildcats finally appear to be finding the rhythm that had them dancing all the way to the NCAA tournament for the first time last year.

Bryant McIntosh tied a season high with 24 points, and Northwestern beat No. 20 Michigan 61-52 on Tuesday night.

"I know there's so much wrong with us and it's a disastrous season and everybody's writing our obituaries," coach Chris Collins said, tongue in cheek. "And it's a lot of fun. But I'm not sure I'm quite seeing that at 6-6, 15-10."

The Wildcats (15-10, 6-6 Big Ten) won for the fourth time in five games, suffocating Michigan with their zone defense down the stretch while McIntosh nailed big shot after big shot. He scored 14 in the second half.

Scottie Lindsey added 19 points and seven rebounds in the game, and Northwestern returned the favor after losing at Michigan last week.

"We didn't get a lot of stops, so we couldn't get running," Wagner said. "We couldn't get in the flow in transition. We missed a lot of free throws, too, and didn't make shots (in the field). Yep, that's how it goes."

Northwestern shook off a slow start to pull within three at halftime and scored 10 straight early in the second to grab its first lead of the game.

The Wildcats went ahead 35-33 on a 3-pointer by Vic Law, who was just 1 for 8 from long range and shot 2 of 10 overall. Layups by Dererk Pardon and a driving Lindsey finished the run and made it a six-point game.

McIntosh carried Northwestern down the stretch, scoring 14 points in the final nine minutes. He started that onslaught by nailing a 3 to make it 47-41 and never let up the rest of the way.

There was McIntosh pulling up for a floater after Pardon blocked a layup by Jordan Poole, and he hit another 3 and a jumper to bump the lead to 54-44 with 3:43 remaining.

McIntosh also drove for a layup off a crossover to make it 58-52 with 1:25 left after a three-point play by Wagner, and the Wildcats hung on from there.

"We try not to - as best we can - listen to the outside noise, talking about how our season's over, that we let it slip away and all that, we're failures," McIntosh said. "We just try to stay locked in. We know there's still a lot to play for right now and the things we want to do aren't out of reach quite yet."

Michigan F Isaiah Livers played just two minutes before leaving the game with a left ankle injury. Coach John Beilein said it stiffened on him at halftime and he was unable to return.

Michigan: The Wolverines need to find their stroke from long range and the foul line. They are 20 of 79 over the past three games after going 5 of 22 in this one. And on free throws, they're 25 of 57 over the past two outings.

Northwestern: The Wildcats simply need to keep this up the rest of the way.

Northwestern: The Wildcats play at Maryland on Saturday.