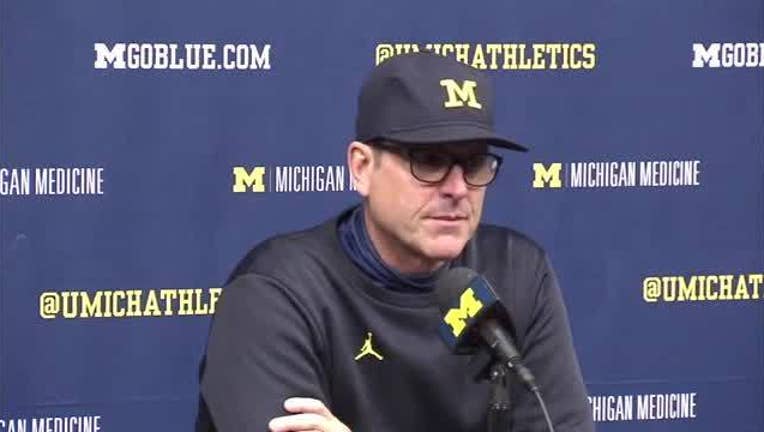 ATLANTA (AP) - Dan Mullen knows he was hired to do more than just lead Florida to any bowl game.

Mullen's mandate is to bring championships to the Gators. His first-year results show he's on the right path.

There may be no better way for Florida to cap its dramatic 2018 rebound under Mullen than to finally beat Michigan for the first time in Saturday's Peach Bowl. Michigan is 4-0 in the series, including a runaway win in the 2017 season-opening game.

Michigan (10-2) is a perfect measuring stick for Florida.

The Wolverines will play Florida for the third time in Jim Harbaugh's four seasons as coach. Michigan opened the 2017 season with a 33-17 win over the Gators and beat them 41-7 in the 2016 Citrus Bowl.

Overall, Michigan is 4-0 against the Gators. The more important record to Michigan fans is Harbaugh's 0-4 record against rival Ohio State, including a crushing 62-39 loss on Nov. 24 .

"Right now, to be frank, we have a bad taste in our mouths," said Michigan offensive coordinator Pep Hamilton.

The Wolverines will play without four key starters, including top rusher Karan Higdon , who are skipping the game to focus on the NFL draft.

Florida has all its players and ample motivation to make a statement.

Florida fullback R.J. Raymond said beating Michigan would show the Gators are on the move.

"That'd be huge for coach Mullen and huge for this program, especially if we can come out with a win against a team like Michigan," Raymond said. "They've got just a big of a brand as we do, so being able to beat them would be huge and would really send this program in the right direction. It would kind of show the Gators are back and we're not playing around anymore and we'll be back for good, especially under coach Mullen."

Here are some more things to know about the Florida-Michigan Peach Bowl matchup:

Harbaugh has tried to sell his players on the goal of an 11th win for only the 10th time in school history.

Wide receiver Donovan Peoples-Jones said players "have to play for ourselves and for Michigan. There's seniors that are going to be playing their last game, so for me it's not going to be hard to be motivated.

Mullen said he hopes to return to Atlanta in 2019, when the Peach Bowl will be the site of a College Football Playoff semifinal. Mercedes-Benz Stadium also is home to the Southeastern Conference championship game, Florida's best path to the playoff.

GONE BUT NOT FORGOTTEN

Harbaugh said he respected the four draft-eligible players who are skipping the game. He also seemed to indicate he didn't agree with the decisions made by Higdon and right tackle Juwann Bushell-Beatty, who are seniors, and two juniors, defensive end Rashan Gary and linebacker Devin Bush.

"I mean, we respect it," Harbaugh said. "It's someone's right, we respect that it's their decision to make. We don't push anybody in the back to go play football. I will say even further, I think I've grown in terms of even respecting people when I don't agree with what their decision is."

Higdon led the Wolverines with 1,178 yards rushing and 10 touchdowns. Bush led the team with 80 tackles. Gary had 44 tackles and 3 ½ sacks. Higdon started the first 11 games.

This is Michigan's first Peach Bowl appearance. Florida is 0-2 in the game with losses to West Virginia in 1981 and Miami in 2004.

Harbaugh replied to speculation about his possible interest in the NFL earlier this month when he said firmly he is staying at Michigan. Even so, he was asked again Friday if he or his representatives had been contacted by any NFL team.

This time, Harbaugh was more evasive.

"I really don't have any representatives," he said. "No agent or anything."