That's something the Wolverines surely understand by now.

"On high alert for everything," Harbaugh said Monday. "We understand coach (Mark) Dantonio's a master motivator. There could be trick plays, special teams, punt fakes, field goal fakes. Everything needs to be alerted and prepared and ready for."

For Michigan State, this game against its biggest rival represents perhaps the last chance to salvage a season that's taken one bad turn after another. For No. 14 Michigan, it's a chance for a second straight victory over an in-state foe that's been a thorn in the Wolverines' side for the past decade. Michigan is a double-digit favorite in Saturday's game on FOX 2 but is being careful not to talk like one. Against this opponent, hubris can backfire.

"This game's kind of an outlier. The record doesn't really matter," Michigan offensive lineman Ben Bredeson said. "In these big rivalry games, anything can happen, and you've got to be ready for it. We know that they're going to be juiced up, ready to play. We're going to be the same way."

Michigan State has lost four consecutive games, including a colossal collapse Saturday in which the Spartans blew a 21-point lead in the final quarter against Illinois. Michigan has gone through its own difficulties this season, but a lopsided win over Notre Dame last month lifted the spirits of Wolverines fans. Although Harbaugh hasn't taken Michigan to the very top of the Big Ten, one thing he has done as coach is halt Michigan State's dominance of this rivalry. The Wolverines won convincingly at Michigan State last season, their second victory in the past three years in the series. 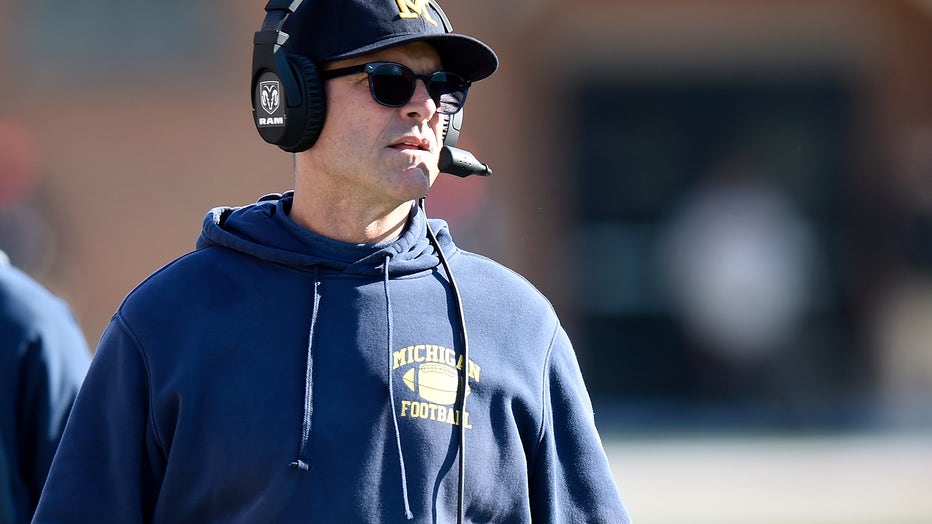 Before that, Michigan had lost seven of eight against Michigan State.

That run of success by the Spartans began after Michigan running back Mike Hart referred to Michigan State as a little brother in 2007. Nobody called out the Spartans like that on Monday, although Wolverines defensive back Ambry Thomas said about the rivalry in general: "Right now it's the most important game on our schedule. It's about who is the big brother and who is the little sister in the state."

When a reporter tried to ask a follow-up question about that analogy, a Michigan spokesman organizing the availability interrupted before Thomas could answer.

There was animosity as recently as last season, when the Spartans walked across the field with linked arms and made contact with Michigan players during pregame warmups. The Big Ten fined Michigan State and reprimanded Harbaugh for his postgame comments about the incident. Michigan linebacker Devin Bush tore up Michigan State's midfield logo with his cleats before the game.

Carlo Kemp, a Michigan defensive lineman, said many players on his team weren't even aware of the incident.

"We didn't even really know what had happened until we all got on our phones after the game," Kemp said. "We were looking at Bush, like: 'When did you do this? When did you have time to do this?'"

When these two teams meet, there's no telling what might happen - before, during or after the game. Michigan defensive lineman Aidan Hutchinson said he's friends with Theo Day, one of Michigan State's backup quarterbacks.

"He called me after the Illinois game. He was pretty frustrated," Hutchinson said. "The talking has definitely started between me and him."

NOTES: Harbaugh said he expects RB Chris Evans to be reinstated for the winter term, and he'll be welcome on the team when he's back in school. Harbaugh said Evans is eligible to play next season. Evans said on Twitter earlier this year he was going through academic issues.