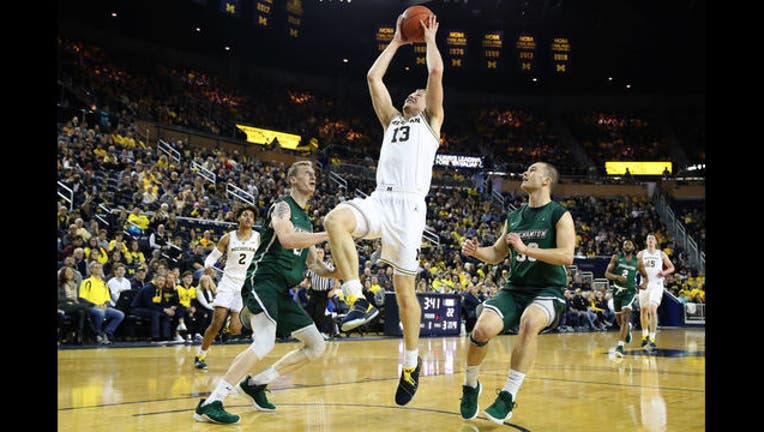 ANN ARBOR, MICHIGAN - DECEMBER 30: Ignas Brazdeikis #13 of the Michigan Wolverines drives to the basket past Caleb Stewart #20 of the Binghamton Bearcats during the first half at Crisler Arena. (Photo by Gregory Shamus/Getty Images)

The Blue Devils earned 35 of 64 first-place votes to stay at No. 1 for the second straight week and fourth week this season, while the top 12 remained in unchanged in the latest poll on Monday.

Duke (11-1) hasn't played since beating No. 11 Texas Tech in New York on Dec. 20, making the Blue Devils one of five ranked teams to be off through the holiday week. That schedule featured no matchups between ranked teams to limit potential movement in the poll, though that figures to change with conference play set to get rolling this week.

There was a top tier to the poll voting, too. Second-ranked Michigan earned nine first-place votes, while No. 3 Tennessee earned 12. Fourth-ranked Virginia and fifth-ranked Kansas each earned four votes.

Kentucky was the highest-ranked climber, rising three spots to No. 13 after a win at rival Louisville - which marked the Wildcats' third straight win against power-conference opponents. No. 19 Houston also rose three spots.

No. 22 Wisconsin had the biggest slide of the week among ranked teams, falling seven spots after losing at home to Western Kentucky. And Arizona State fell out from No. 17 after a home loss to Princeton, which came a week after the Sun Devils beat then-No. 1 Kansas.

Nebraska was the lone addition at No. 24, continuing the Cornhuskers' in-and-out ways. They made their first poll appearance of the season at No. 24 on Dec. 3, fell out for a week, re-entered at No. 25, then fell out of last week's poll.

The top 25 teams in The Associated Press' college basketball poll, with first-place votes in parentheses, records through Dec. 30, total points based on 25 points for a first-place vote through one point for a 25th-place vote and last week's ranking: