Michigan State is giving Mel Tucker a $95 million, 10-year contract, making an aggressive move to keep a football coach who potentially could leave for LSU or the NFL.

"I am honored to be a part of the Spartan process today, and for years to come,"

Tucker's contract establishes him one of the riches coaches in college football.

Tucker's 10-year deal puts him in select company with two coaches with the same term: Clemson's 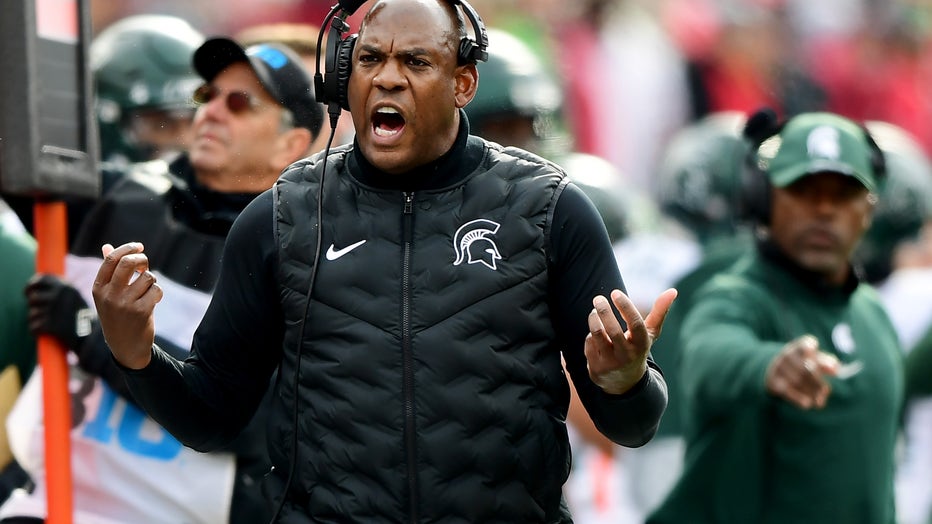 COLUMBUS, OHIO - NOVEMBER 20: Head coach of the Michigan State Spartans, Mel Tucker, reacts during the first half of a game against the Ohio State Buckeyes at Ohio Stadium on November 20, 2021 in Columbus, Ohio. (Photo by Emilee Chinn/Getty Images)

Swinney's contract is worth $92 million and Fisher's deal will pay him more than $9 plus million a year, starting in 2022.

"We’re excited to have Mel here for the next 10 years," United Wholesale Mortgage president and CEO Mat Ishbia, one of the donors funding Tucker's new deal, told The Associated Press in a telephone interview. "He’s a winner. He represents Michigan State in a fantastic way and we’re excited for the future.

"We got a winner and we’re not letting a winner leave Michigan State. Mel didn’t want to leave, but the reality is he’s the hottest name in football."

The 49-year-old Tucker is getting a boost in pay as part of a long-term deal because of what he has done so far, and what has happened in the past at Michigan State.

After winning just two games in his debut during the pandemic-shortened season, Tucker has led one of college football's most surprising teams. The Spartans started the season unranked and overlooked and now have a chance to win 10 games and earn a spot in a New Year’s Six bowl game.

No. 2 Ohio State did show Tucker's team how far it has to go in last week's 56-7 win that ended the Spartans' championship hopes.

Michigan State was very motivated to give Tucker every reason to stay after losing Saban to LSU in November of 1999.

"There was a time Michigan State had the best football and basketball coach with Nick Saban and Tom Izzo," Ishbia told the AP. "Now, we have a chance to have the best coaching duo again in America and we're going to pay Mel like he left."

Even before the championship-caliber program in Baton Rouge, Louisiana, announced it was parting ways with Ed Orgeron earlier this season, Tucker was mentioned as a candidate in part because he coached the Tigers' defensive backs under Saban in 2000 and has an impressive resume with stints on staffs at Ohio State and Georgia.

Tucker's ties to the NFL also made it likely that teams with coaching openings in the league would try to pry him away this winter. Tucker was 2-3 a decade ago as an interim coach in Jacksonville, where he was defensive coordinator, a role he also had with his hometown Cleveland Browns and Chicago over his 10 seasons on NFL sidelines.

While it is going to cost a lot of money to keep Tucker at Michigan State, the boost in pay is primarily being provided as a gift

Ishbia was a walk-on guard on Tom Izzo's 2000 national championship basketball team. Earlier this year, Ishbia made a $32 million donation for Michigan State's athletics and he is giving $500 a month to the school's football and men’s basketball players. St. Andre is the founder and CEO of

Tucker didn't have much time with his new team last year before the pandemic pushed players away from campus and it showed with a 2-5 record.

With an influx of transfers, including Heisman Trophy-candidate running back Kenneth Walker, the Spartans won their first eight games this season, including a second straight win over rival Michigan.

Whether the season ends with successes or setbacks, the school and its fans should not have to worry about losing their coach.

"Michigan State is not a stepping stone, it's a destination, and Mel knows that," Ishbia told the AP. "He didn't want to leave, but when someone is all in and they're loyal, you take care of them."