CHAMPAIGN, Ill. - CHAMPAIGN, Ill. (AP) — Payton Thorne threw for 182 yards and two touchdowns as Michigan State ended a troubling week where eight players were suspended for a post-game fight with Michigan last week by defeating No. 14 Illinois 23-15 on Saturday.

The Spartans (4-5, 2-4 Big Ten) stopped the Illini five times on fourth down to end a three-game losing streak.

The eight Michigan State players were suspended for for the fight, which happened as both teams headed up the same tunnel toward their locker rooms.

Despite their absences, the Spartans were able to hang tough on the road against a ranked opponent — and throw a little chaos in the Big Ten West race. 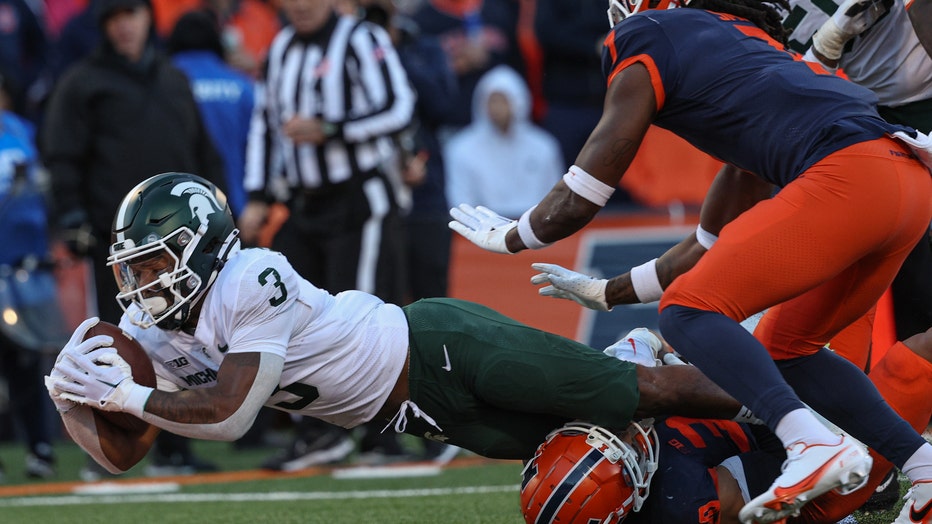 CHAMPAIGN, IL - NOVEMBER 05: Jarek Broussard #3 of the Michigan State Spartans dives a for a touchdown during the second half against the Illinois Fighting Illini at Memorial Stadium on November 5, 2022 in Champaign, Illinois. (Photo by Michael Hicke

Spartans wideout Jayden Reed got loose for a 16-yard touchdown reception for a 23-7 lead with 2:57 to go and the defense did enough to halt a late comeback effort. Quarterback Tommy DeVito and the Illini (7-2, 4-2 Big Ten) stalled at the Spartans' 25 when time expired.

The Illini turned the ball over on downs three times in the red zone and went a combined 7 of 23 on third and fourth down attempts. Michigan State converted on its only fourth down try.

Illinois took a 7-0 lead when Isaiah Williams followed a pair of big blocks and juked a couple of defenders on his way to a 60-yard touchdown reception seven minutes into the game.

The Spartans got on the board in the second quarter with a 21-yard field goal from Ben Patton before Thorne completed a 1-yard touchdown pass to Tre Mosley to cap a seven-play, 61-yard drive to put Michigan State up 9-7 after a missed point after attempt.

Xavier Henderson forced a fumble from Brown on a big gain and Aaron Brule recovered to preserve a 9-7 Spartans lead they would take into the half.

Michigan State started in prime position at the Illinois 29 when Hugh Robertson’s punt traveled just six yards after it hit a teammate. Thorne completed a nine-yard pass to Jalen Berger to extend the drive before Jarek Broussard scored on an 11-yard run to stretch the Spartans’ lead to 16-7 with 5:45 left in the third.

Illinois responded with an eight-play, 56-yard drive capped by a seven-yard Isaiah Williams touchdown reception to pull within eight points with 14:27 to go.

Michigan State: A string of defeats and a chaotic week following the fight at Michigan could have been enough to tear this group apart, but the Spartans regrouped well to earn a key road win and keep their bowl hopes alive with two of three games at home to close the regular season.

Illinois: The Illini could have moved within one win of clinching the Big Ten West with a victory, but they remain in strong position as Purdue visits next week in a decisive conference tilt.