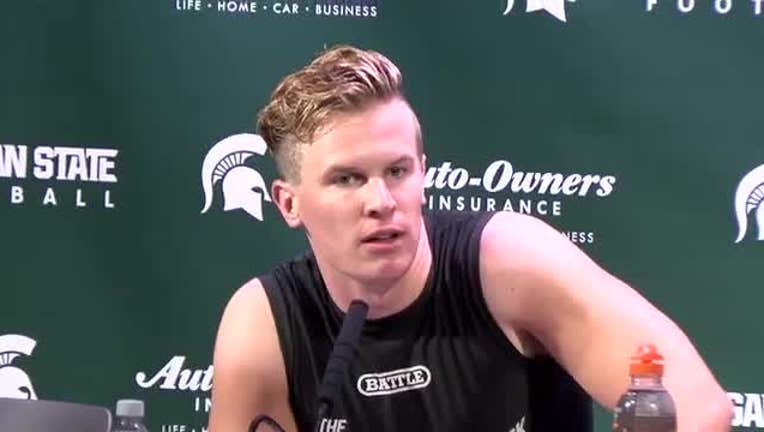 EAST LANSING, Mich. - Regardless of how the season has gone so far, Michigan State is not a team to be taken lightly.

No. 6 Penn State should know that as well as anyone.

The Nittany Lions lost to the Spartans each of the past two seasons, falling on a last-second field goal in 2017 and a last-minute touchdown the following year. Penn State was ranked in the top 10 both times, so the unbeaten Nittany Lions should have their guard up when the teams meet again Saturday.

"They are just always really well-coached, disciplined team, no matter what their record is," Penn State cornerback John Reid said. "They are always a great team. That's kind of the approach we have always taken."

This year, Michigan State (4-3, 2-2) hasn't shown it can compete with the Big Ten's top teams. The Spartans are coming off losses to Ohio State and Wisconsin in which they were outscored 72-10. But this game should have their full focus. They had an open date last weekend - and will have another one next week.

Michigan State has beaten a top-10 team in five of the past six seasons, and this may be its last chance to do so this year.

"Have not had a home game since September 28th, so a little bit different type of scheduling," Spartans coach Mark Dantonio said. "Sort of in a different phase here because we have one game, basically in three weeks' time with a bye coming next week."

Penn State (7-0, 4-0) is also off next week, so if the Nittany Lions can get past this challenge, they'll have a chance to catch their breath soon enough.

Michigan State's Darrell Stewart leads the Big Ten with 46 receptions and 683 yards receiving. Penn State's KJ Hamler has seven touchdown catches and is the type of big-play threat who could be the difference in a close game.

"KJ is a guy that's been electrifying thus far, and has been a guy that can go the distance," Dantonio said. "So we've got to play."

Brian Lewerke threw for 400 yards against Penn State two years ago, and his 25-yard touchdown pass with 19 seconds left last season - when a field goal would have been enough to force overtime - gave Michigan State the win in that game.

The Nittany Lions counter with Sean Clifford, who leads the conference in total offense.

This portion of the schedule - Ohio State, Wisconsin and Penn State - is the third time Michigan State has faced three straight top-10 opponents. They also had to do it in 1970 and 1972.

Penn State began the season with a 79-7 win over Idaho and also beat Maryland 59-0 last month. However, the offense hasn't always been on that kind of roll. The Nittany Lions had to hold off Pittsburgh 17-10 and beat Iowa 17-12.

Penn State had trouble moving the ball for much of the second half in last weekend's 28-21 win over Michigan.

"I think consistency is about everything. It's about our run game. It's about our protection. It's about hitting the throws that we should hit consistently. You know, it's all of it. It's third down," coach James Franklin said. "We've missed some opportunities."

Matt Coghlin, whose field goal beat Penn State two years ago, has made only 11 of 17 field goal attempts this season for Michigan State.