GREENVILLE, S.C. - Michigan State was tough enough to take back the lead in a critical moment, then fortunate enough to withstand Davidson's desperation final charge.

"I thought it was a little bit of a roller-coaster," Hall of Fame coach Tom Izzo said.

The Spartans survived regardless, getting a career-high 27 points from Joey Hauser to edge the Wildcats 74-73 on Friday night in the NCAA Tournament's first round. The win sets up

Seeded seventh in the West Region, Michigan State (23-12) had to wrestle away control of a tight game against the Wildcats in the second half. The Spartans used a 16-3 run to go ahead for good while allowing just one field goal over a critical 6-minute stretch, pushing the Spartans to their largest lead at 67-59 with a minute left and seemingly putting the game away.

Only the 10th-seeded Wildcats (27-7) took the fight to the final minute, though, even while getting tripped up by several quick — and sometimes borderline — whistles down the stretch. 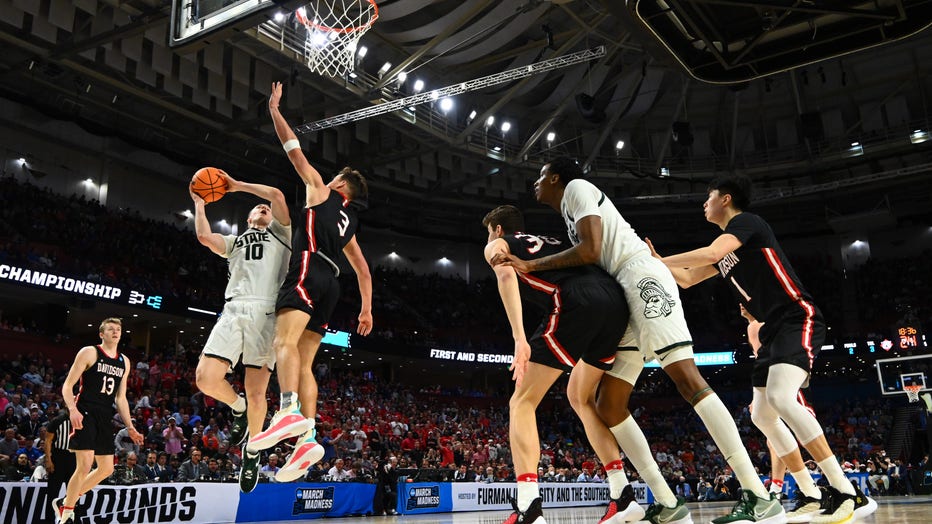 GREENVILLE, SC - MARCH 18: Joey Hauser #10 of the Michigan State Spartans takes a shot under coverage from Sam Mennenga #3 of the Davidson Wildcats during the first round of the 2022 NCAA Men's Basketball Tournament held at Bon Secours Wellness Arena

Luka Brajkovic scored 18 points on 8-for-10 shooting to lead Davidson. Sam Mennenga added 15 points as the Wildcats shot 48% and made 10 of 25 3-pointers — but just couldn’t quite catch the Spartans.

Davidson pulled to within 72-70 on a 3-pointer from Foster Loyer, a transfer facing his former team, with 4.6 seconds left. Then, after Tyson Walker hit two free throws to put the margin back to four, Hyunjung Lee hit a desperation 3 for Davidson with a half-second left.

"That last minute," Brown said, "it was a lot of pressure going on."

Now, it will be Izzo vs. Krzyzewski one more time.

The two teams have played often over the years — both are part of the four-team Champions Classic along with Kentucky and Kansas that traditionally begins the college hoops season. But despite a national title and eight Final Four trips on his resume, Izzo hasn’t had much success against his counterpart: He’s just 3-12 in 15 tries against Coach K.

Davidson: The Wildcats had a big year, winning the Atlantic 10 regular-season title and cracking the Top 25 briefly for the first time in seven years. The Wildcats lost to Richmond in the A-10 tournament final but did enough to earn the second at-large tournament bid in program history. They just couldn't extend their push to claim their first tournament win since the Stephen Curry-led run to the Elite Eight in 2008.

Michigan State: The Spartans opened the year unranked, then spent 12 weeks in the Top 25 and peaked at No. 10 before falling out again by February. Michigan State lost seven of 10 to close the regular season, then lost to Purdue in the Big Ten Tournament semifinals. Now, as they play in their 24th straight NCAA Tournament, they have claimed at least one win for the 18th time.

Hauser carried a heavy offensive load, hitting hit his first eight shots before finishing 9 of 12 from the field with four 3-pointers.

The 6-foot-9 fifth-year senior had seen his scoring average (6.7) and shooting percentage (.431) drop this season with only seven double-figure scoring outputs. His struggles included a scoreless, 0-for-4 performance in the Purdue loss last week.

"I thought we had a really good plan offensively, so I felt really confident in that," Hauser said. "Offensively, I’ve been struggling this season, just trying to let it fly and not worry about missing shots. So tonight I really just let that happen, and good things happened."

Davidson led 56-51 when the Spartans made their move. After Hoggard attacked the paint for a score, Hauser hit a 3-pointer

Before the Spartans’ decisive push, the teams had battled evenly with neither leading by more than six points.

"It was that eight-point swing from five points up to three points down, I think that was the critical juncture of the game," McKillop said.

The Spartans will play Sunday against the Blue Devils, who beat Cal State Fullerton earlier Friday.