DETROIT - Mike Minor held Detroit hitless until the fifth inning, and Andrew Benintendi and Ryan O'Hearn homered off Casey Mize to lift the Kansas City Royals to a 6-2 victory over the Tigers on Friday night.

Robbie Grossman went deep for Detroit in the fifth, but by then the Tigers were trailing 6-0 after another rough start for Mize. The top pick in the 2018 draft earned his first big league win earlier this month when he held Houston scoreless for seven innings, but since then Mize (1-2) has allowed 11 runs in two outings against Oakland and Kansas City. 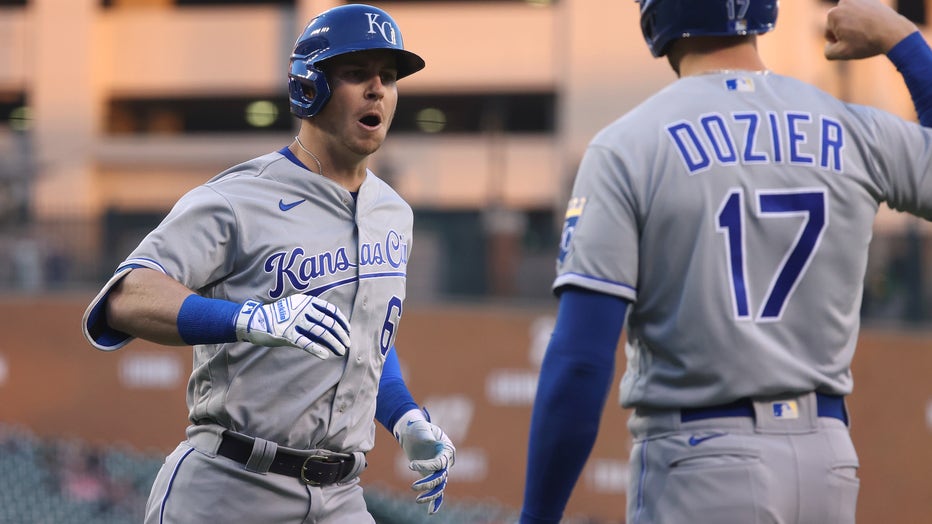 DETROIT, MICHIGAN - APRIL 23: Ryan O'Hearn #66 of the Kansas City Royals celebrates scoring a run in the fifth inning with Hunter Dozier #17 while playin the Detroit Tigers at Comerica Park on April 23, 2021 in Detroit, Michigan. (Photo by Gregory Sh

"Just happy with how he went about his business in general," Royals manager Mike Matheny said. "We need our starters not to need too much help early on."

Detroit didn't have a hit until Jeimer Candelario doubled to lead off the bottom of the fifth. Grossman hit a two-run shot later that inning.

Detroit has lost seven of eight.

Benintendi opened the scoring for the AL Central-leading Royals with a solo homer in the second.

"I feel like the last few games, that timing has been a lot more consistent," Benintendi said. "I feel like I’m driving the ball a little more, hitting barrels."

O'Hearn made it 2-0 in the fourth with his home run. He was recalled prior to the game after the Royals optioned outfielder Kyle Isbel to their alternate site following Wednesday's game.

"I never felt out of it," Mize said. "If I get Soler to pop up right there, I’m out of there with two runs instead of four."

Detroit's Zack Short singled in the sixth for his first major league hit. He narrowly missed a home run during that at-bat when his drive to left went foul.

"I’ve hit a few of those in my career that usually stay fair," Short said. "The wind wasn’t really in my favor all night if I was going to try to pull something like that."

Royals: RHP Tyler Zuber was hit on the throwing arm by a comebacker in the sixth, but Matheny said X-rays were negative.