"Be patient," Pletcher said. "I think you have the best last quarter of any horse in the race."

Mo Donegal pulled away down the home stretch and held off filly Nest to win the Belmont Stakes, giving Pletcher a 1-2 finish and his sixth Triple Crown victory, including four at this track on the outskirts of New York City.

"To be honest with you, we were a little confident going into the race today," Donegal Racing CEO and co-owner Jerry Crawford said. "When he turned for home, I was like, forget about it. I know Todd thought he could get a strong last quarter mile, and he sure did." 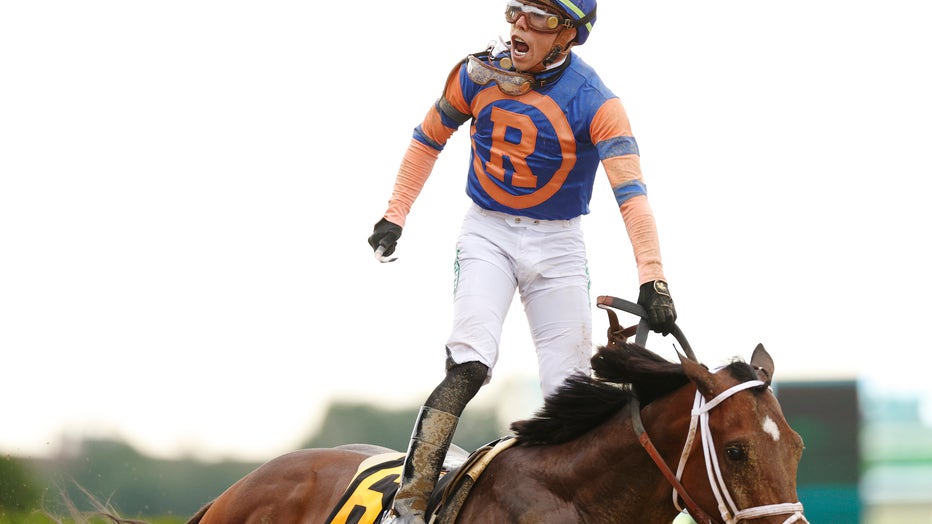 Mo Donegal rounded the 1 1/2-mile track in 2 minutes, 28.28 seconds, ahead of Nest and Skippylongstocking. Pletcher, who lives on Long Island, adds another Belmont title following wins with Rags to Riches in 2007, Palace Malice in 2013 and Tapwrit in 2017.

Rich Strike, a stunning Kentucky Derby winner at 80-to-1 odds, was sixth.

Mo Donegal beat a wide-open, eight-horse field without a clear favorite — We the People, a monster in the mud, opened at 2 to 1 amid a rainy forecast but reached 7 to 2 by race time as showers held off.

Mo Donegal entered the gate the betting favorite at 5 to 2. We the People led for much of the race, but Mo Donegal and Ortiz took charge coming out of the final turn.

Rich Striker owner Rick Dawson and trainer Eric Reed held the Kentucky Derby winner out of the Preakness with an eye on Belmont, the first healthy horse to skip Pimlico after winning the Triple Crown's first even since 1985.

Reed said the team encouraged jockey Sonny Leon to try pushing Rich Strike from the outside, but the horse kept trying to get back inside — where he made a late charge past 19 horse to win at Churchill Downs. Rich Strike spent much of the race in last place and couldn't recover.

"I think we just made a tactical error," Reed said.

Just like Rich Strike, Mo Donegal was at the back of the pack at the Derby, but the colt didn’t have enough kick at Churchill Downs. He found it Saturday, winning the 154th running of the $1.5 million race.

Mo Donegal made a winner out of co-owner Mike Repole, a local entrepreneur known around the track as "Mike from Queens." Repole also co-owns Nest.

It’s the fourth straight year the Triple Crown races were won by three different horses, a first for the sport since 1926-29.

The race marked a return to form for Belmont itself after the 2020 Stakes were closed to the public due to the pandemic and the 2021 event was limited to 11,238 spectators by virus restrictions.

Capacity was capped again, this time at 50,000, because of congestion concerns stemming from the newly built arena next door for the NHL’s New York Islanders. Still, fans crammed into cars on the Long Island Rail Road and breathed life into the 117-year-old track with floral headwear, pastel suits and the unmistakable musk of booze and cigars.

The reported attendance of 46,103 fell far short of the grounds record 120,139 set in 2004. Not much of a surprise, given the shaky weather forecast and the lack of a Triple Crown contender.

The field was sparse, too. No horse ran all three Triple Crown legs this year, heightening concern that three races in five weeks may be too tight a schedule to keep the horses healthy.

Preakness winner Early Voting was sidelined, likely to prepare for the $1.25 million Travers Stakes at Saratoga Race Course on Aug. 27. Epicenter, the runner-up at the Kentucky Derby and Preakness, also skipped.

In the $500,000 Acorn for 3-year-old fillies, Matareya romped to a 6 1/4-length victory. Favorite Echo Zulu scratched at the post on the advice of the track veterinarian.

Trained by Brad Cox and ridden by Flavien Prat, Matareya ($2.60) ran the mile in 1:35.77, winning for the fifth time in eight career starts.

Heavily favored Flightline got off a step slow, overcame an early traffic issue and cruised to a six-length victory in the $1 million Hill ‘N’ Dale Metropolitan Mile.

The victory kept the 4-year-old Tapit colt undefeated in four career starts. This was the first one he did not win by double-digit lengths.

Flightline ($2.90) was also ridden by Prat and trained by John Sadler.