OAKLAND, Calif. - OAKLAND, Calif. (AP) — Sean Murphy hit a three-run homer to highlight Oakland's five-run sixth inning that broke up a scoreless game, and the Athletics beat the Detroit Tigers 5-0 on Thursday to split a doubleheader.

In the first game, Jeimer Candelario homered and Robbie Grossman doubled twice and drove in three runs against his former team as Detroit won 7-2.

Stephen Vogt added a sacrifice fly and Tony Kemp an RBI single in the fifth for the A's, who started an eight-game homestand Thursday to begin the second half. 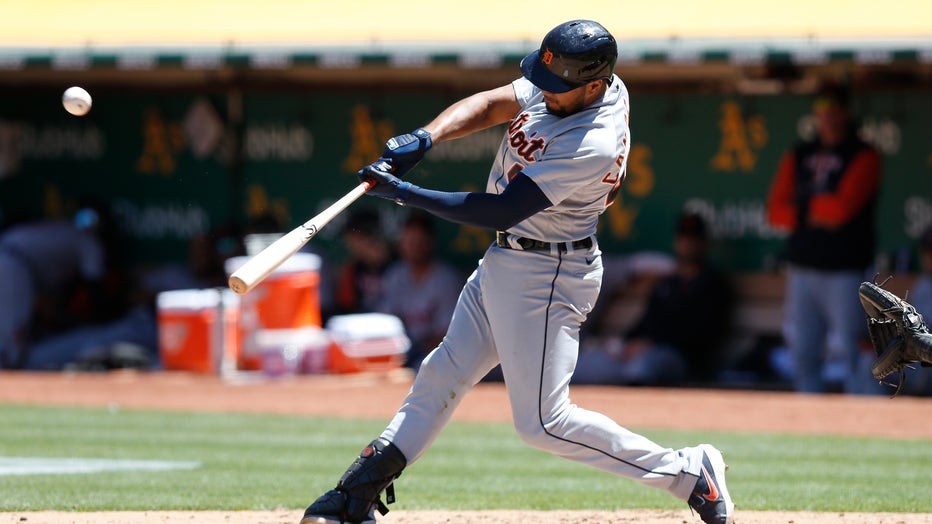 OAKLAND, CALIFORNIA - JULY 21: Jeimer Candelario #46 of the Detroit Tigers hits a solo home run in the top of the seventh inning during game one of a doubleheader at RingCentral Coliseum on July 21, 2022 in Oakland, California. (Photo by Lachlan Cunn

Frankie Montas started the second game, returning from missing two turns with inflammation in his pitching shoulder. He went three innings before Domingo Acevedo (2-2) worked the sixth for the win. He was the third of six Oakland pitchers in a four-hit gem that took 2 hours, 45 minutes.

It was the sixth shutout of the season for the A's.

Montas had been forced out of his last outing July 3 at Seattle and wasn’t expected to work deep into the game.

In the opener, Candelario connected leading off the seventh to help back Tarik Skubal (7-8), who struck out nine and didn't allow an earned run over six impressive innings while pitching back home in the East Bay.

He is back on track after losing five straight starts from June 12 to July 3, utilizing his steady slider.

"My slider’s my best pitch and I kind of just didn’t have a great feel for it. It kind of wasn’t doing what I want it to do," Skubal said. "I was able to get it back to the movement I like, and I think that’s why my results have been a little bit different than prior."

Grossman's two-run double in the third put Detroit ahead, then he doubled again two innings later as the Tigers added an unearned run after second baseman Sheldon Neuse's fielding error. Jonathan Schoop provided insurance runs with an eighth-inning double and a sacrifice fly in the ninth. Riley Greene added an RBI single in the ninth.

Tigers reliever Alex Lange gave up a home run to Seth Brown in the seventh. Stephen Piscotty had a sacrifice fly for Oakland.

A's lefty Zach Logue (3-5) allowed three runs on five hits over six innings, struck out four and walked one. He's yet to win back-to-back starts or decisions in 2022. He was called up before the game from Triple-A Las Vegas for his fifth stint of the season with Oakland and will return to the minors.

"I'm just trying to be where my feet are," he said.

Detroit played its seventh doubleheader this season — second most in the majors behind Cleveland's eight — and still has two more scheduled. This one was necessitated by the lockout-delayed start to the season.

The A's went 5-2 against the Tigers to take the season series for a fifth straight year. This matchup came after a previous doubleheader between the clubs on May 10 in Detroit during which the A's were the home game for opener. This marked another quick trip West for the Tigers after playing in the Bay Area with a two-game series at San Francisco from June 28-29.

"I’ve had a makeup series before, but never usually three time zones in (one day) and then immediately return back home," manager A.J. Hinch said.

The Tigers recalled INF Zack Short and INF/OF Kody Clemens from Triple-A Toledo and placed RHP Will Vest on the paternity list after he welcomed a baby boy. Vest is expected back Saturday.

Following Friday's off day, RHP Michael Pineda (2-5, 5.22 ERA) will pitch Saturday for the Tigers back home against the Twins.

LHP Cole Irvin (4-7, 3.21) will take the mound Friday night for the A's in the opener of a weekend series at home with the Rangers.