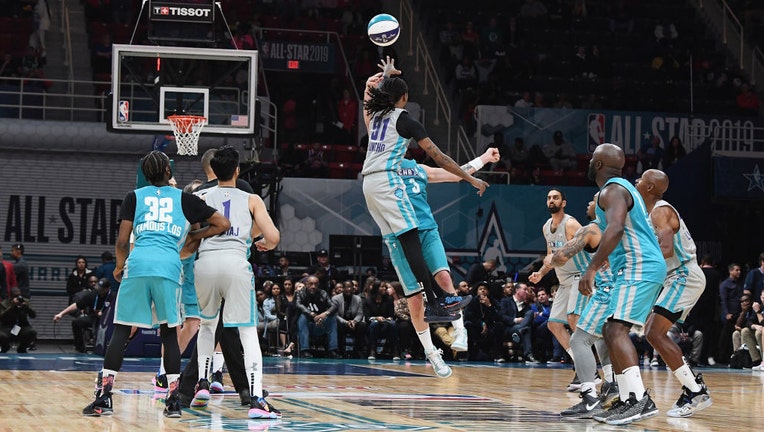 Quavo shoots the ball during the 2019 NBA All-Star Celebrity Game at Bojangles Coliseum on February 16, 2019 in Charlotte, North Carolina. (Photo by Kevin Mazur/WireImage)

WASHINGTON - Stars from the entertainment world will lace up their sneakers to show off their hoop skills in the 2022 NBA All-Star Celebrity Game.

The exhibition takes place on Feb. 18 at 7 p.m. ET at the Wolstein Center in Cleveland, Ohio, and will kick off NBA All-Star weekend ahead of the 71st NBA All-Star Game on Feb. 20.

Last week, the NBA and ESPN released the names of celebrities playing in the upcoming game.

NBA 75th Anniversary Team members and Naismith Memorial Basketball Hall of Famers Dominique Wilkins and Bill Walton will be the head coaches for the game.

How can I watch the 2022 NBA All-Star Celebrity Game?

ESPN will televise the game on Friday, February 18, at 7 p.m. ET as part of its overall NBA All-Star coverage. Viewers can also stream game on the ESPN App.

James had the first pick among players in the starters pool for the Feb. 20 game in Cleveland and drafted Giannis Antetokounmpo. He also drafted former MVPs Stephen Curry and Nikola Jokic in the starter pool, along with Chicago's DeMar DeRozan.

Durant took first-timers Ja Morant of Memphis and Andrew Wiggins of Golden State, and Boston's Jayson Tatum — who replaced him in the starters pool because Durant is injured and won't play.

James has been a captain every year since the NBA went to a format where the leading vote-getters draft teams, instead of Eastern Conference vs. Western Conference. His teams have gone 4-0.