BOSTON - Carter Savoie scored with 14:53 gone in overtime, converting on his own rebound to lead Denver past Michigan 3-2 in the Frozen Four semifinal on Thursday night and into the NCAA championship game.

The Pioneers will play for the title Saturday night against the winner of the late semifinal between Minnesota and Minnesota State. It would be Denver's ninth hockey championship, tying Michigan for the most in NCAA history.

Magnus Chrona made 19 saves for the Pioneers, who twice went ahead in regulation, on goals from Brett Stapley and Cameron Wright. But both times Michigan tied it — on goals from Jimmy Lambert and Thomas Bordeleau, the latter with 11 minutes left in regulation.

It stayed that way until Michigan failed to clear the puck from its own zone, with two Wolverines skating past the puck near the blue line, each leaving it for the other. The puck found its way to Hobey Baker finalst Bobby Brink in the corner. 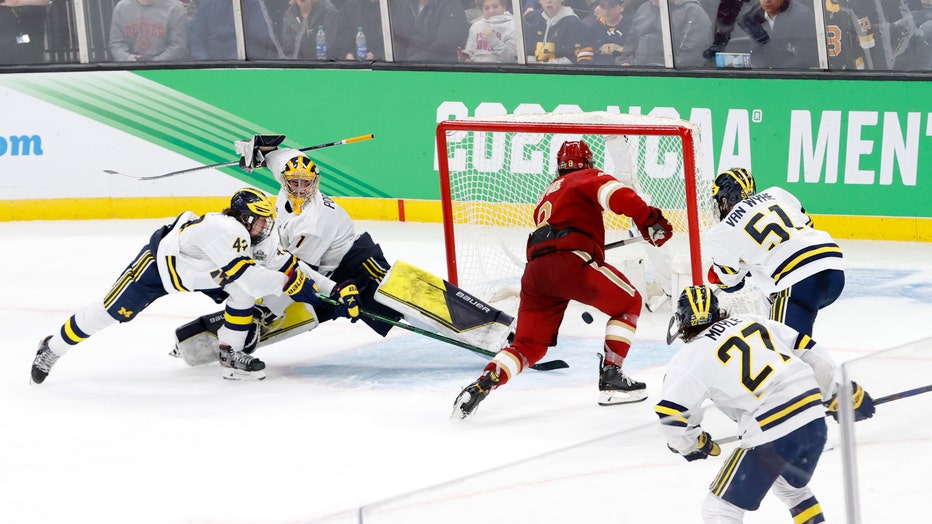 BOSTON, MA - APRIL 07: Denver Pioneers forward Carter Savoie (8) scores the game winner in overtime during a Frozen Four semifinal between the Michigan Wolverines and the Denver Pioneers on April 7, 2022 at TD Garden in Boston, Massachusetts. (Photo

He centered it to Savoie, who delivered the winner on his second try.

Erik Portillo stopped 30 shots for the Wolverines in the matchup of college hockey's two most decorated programs.

Denver scored first when Stapley picked up a rebound, slid it over to his backhand and easily beat Portillo with eight minutes gone in the first period. Michigan tied it four minutes into the second, when Nolan Moyle dug the puck out from behind the net and sent it in front to Lambert coming across the middle.

Denver took a 2-1 lead when Mike Benning flipped it in from the blue line and Wright it off the post and in.

Michigan tied it with 11 minutes to play in regulation after Mark Estapa threw himself to the ice to block a shot. The puck bounced off him and into the neutral zone, where Michael Pastujov grabbed it and took off.

As he approached the net, he tried to shoot or pass but the puck deflected off a defender and right to Bordeleau, who was trailing the play. His goal made it 2-2, and that’s the way it stayed when Michigan killed off two more penalties -- three in all, to none for Denver.