NEWARK, NJ - Alex Nedeljkovic had 37 saves and Dylan Larkin had a goal and two assists, leading the Detroit Red Wings to a 5-2 victory over the New Jersey Devils on Saturday night.

Ben Chiarot and Jakub Vrana each had a goal and an assist in Detroit's second straight win to begin the season. David Perron and Dominik Kubalik also scored.

The Red Wings beat Montreal 3-0 on Friday night in their opener.

Dougie Hamilton had a goal and an assist for New Jersey. Miles Wood also scored. 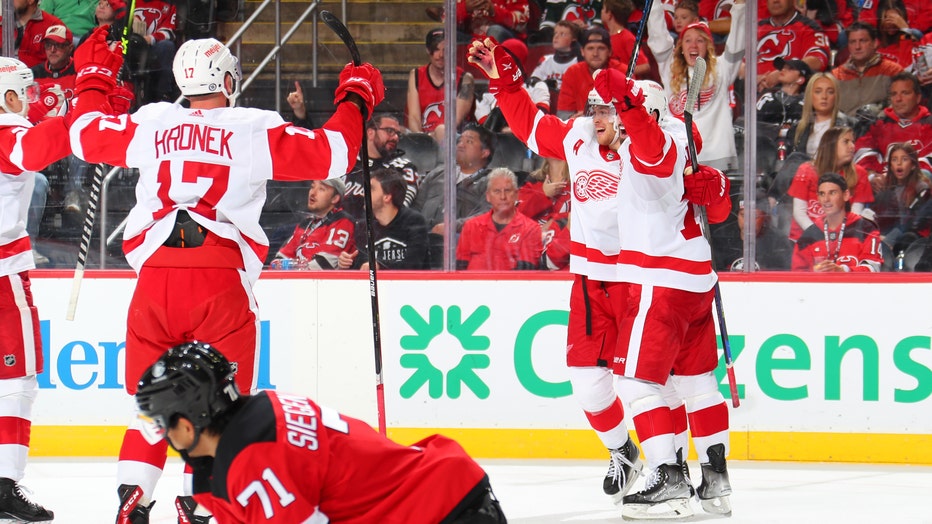 Hamilton opened the scoring 4:45 into the first. He settled a pass from Jesper Bratt and ripped one from the blue line for his first goal of the season.

Detroit responded early in the second.

Goals by Chiarot and Vrana lifted the Red Wings to a 2-1 lead. Chiarot scored on a shot from the blue line off a pass from Larkin. Lucas Raymond and Chiarot assisted on Vrana's goal at 4:34.

After Wood scored 10 seconds later for New Jersey, Detroit went ahead to stay with two more second-period goals. Perron made it 3-2 at 17:02, and Larkin scored a short-handed goal in the final second after Devils goaltender Vitek Vancek lost his stick.

New Jersey was booed off the ice in its home opener after 40 minutes. The Devils also lost 5-2 at Philadelphia on Thursday night.

It was the second chorus of boos from Devils fans at a packed Prudential Center directed at its own team. The first were at third-year coach Lindy Ruff during introductions.

Vanacek had 16 saves in his Devils debut. He spent the first part of his career with Washington, and then signed a three-year contract with New Jersey in the offseason.

Nedeljkovic is expected to split time with Ville Husso for Detroit this season, at least to start.

Devils captain Nico Hischier returned to the lineup after missing the last few weeks with an ankle injury. ... Detroit’s Tyler Bertuzzi left 4:05 into the second after blocking a shot and did not return.