Julius Randle chipped in 21 points for the Knicks, who have won two of their last three games.

Barrett shot 10 for 17 from the field and finished with five assists and five rebounds to help New York bounce back from Wednesday night’s 112-83 loss at Brooklyn. 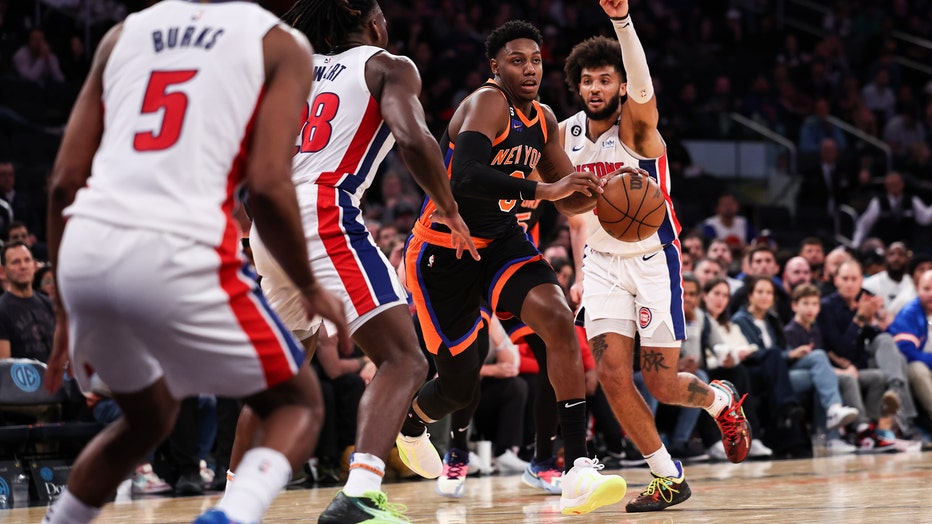 NEW YORK, NEW YORK - NOVEMBER 11: RJ Barrett #9 of the New York Knicks in action during the fourth quarter of the game against the Detroit Pistons at Madison Square Garden on November 11, 2022 in New York City. NOTE TO USER: User expressly acknowledg

"We played hard from the beginning. We got up to a lead and kind of kept that throughout the game," Barrett said. "It was fun basketball having multiple guys involved, everybody contributing."

Bojan Bogdanovic scored 25 and Alec Burks had 17 for Detroit, who have now lost five of their last six games.

The Pistons are 0-7 on the road this season.

"We shot poorly as a team from the 3-point line (7 for 31). As a team we played better defense in the second half," Bogdanovic said.

New York went on an 11-2 run to go up 79-62 on a Randle layup with 7:54 remaining in the third quarter and a pair of Derrick Rose free throws gave the Knicks a 94-80 advantage at the end of the period.

The Pistons opened the fourth quarter with a 15-7 spurt and capped it with consecutive 3-pointers from Isaiah Livers that cut the deficit to 101-95 with 7:02 left in regulation.

Barrett then knocked down a pair of free throws and a 3-pointer by Quentin Grimes in front of the Pistons bench with 40 seconds made it 119-110 to seal the Knicks victory.

Barrett scored 12 points in the first quarter, including seven during a 14-5 run that helped the Knicks take a 30-26 lead at the end of the period.

He added eight points during the second quarter, nailing a 3-pointer with eight seconds left to give New York a 68-58 halftime lead.

"(Barrett was) great downhill, attacking the basket, a lot of pressure on the rim," Knicks coach Tom Thibodeau said. "We’ve been terrific with scoring on the paint all year long and a big part of it is the pressure that he puts on people."

Knicks: Isaiah Hartenstein had 12 rebounds. … New York has won its last eight meetings against the Pistons. The previous loss was Nov. 6, 2019 at Detroit.