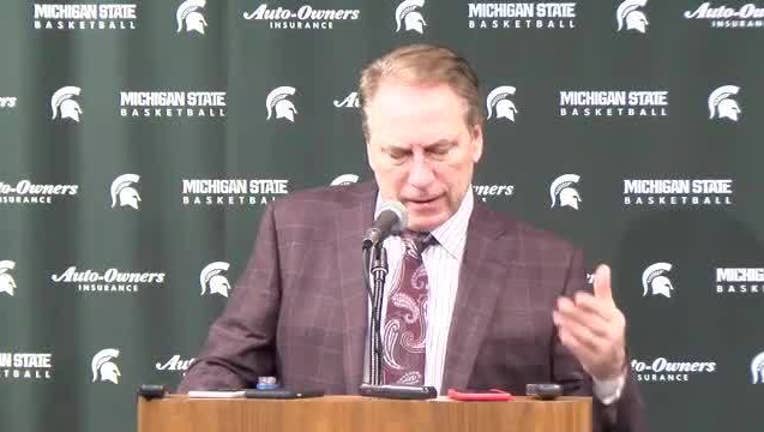 The Spartans built a big lead early and dominated at times in the paint in their 71-56 win on Sunday. From Izzo's standpoint, that's all they did well and that won't be enough for the Spartans to be the team they want to be.

"Maybe we're all talking too much about how good we are," Izzo said. "We're not that good."

Playing without guards Joshua Langford and Kyle Ahrens, Michigan State's offense suffered through spurts of inconsistency while also mounting the runs necessary to keep the game out of reach.

Michigan State turned the ball over 17 times and shot 49 percent from the field.

"They missed some shots that I think they could've made," Izzo said. "The turnovers were a joke."

Kenny Goins added 10 rebounds for the Spartans, who only trailed for 10 seconds and led by as many as 21 with 6:44 to play.

The Spartans took control just over five minutes into the first half with a relentless possession.

Fueled by a pair of offensive rebounds from Goins and Xavier Tillman, the Spartans controlled the ball for nearly 40 seconds and took the lead for good when Winston pinpointed a bounce pass through traffic to Goins, who finished with a right-handed dunk. Goins' jam sparked a 28-14 run for the Spartans, who led 40-24 at halftime.

"We haven't brought it all together yet," Penn State coach Patrick Chambers said. "We still have 14 (games) to go and we can turn this ship around right away."

"I hate to say it, and I'm giving him credit for the whole season, but I told Cass, that was one of the worst games I've seen him play," Izzo said.

Winston, who entered averaging 18 points per game, led the team with seven turnovers. His 11 points were his lowest output since Florida held him to 10 on Dec. 8.

Izzo said he wasn't sure when Langford and Ahrens, who missed his first game this season with a back injury, would be back to help take the load off Winston in the backcourt.

"He sure as hell deserves a hall pass," Izzo said. "But he can't get many of them if we're going to be a real good team."

DOMINATION ON THE GLASS

Ward and Goins combined to grab more than half the Spartans' rebounds. Overall, Michigan State outrebounded Penn State 41-21 but only scored two more points in the paint than Penn State's 22.

"We did a better job keeping them off the glass in the second half," Chambers said.

Dread went down with an apparent ankle injury with 8:11 to play.

The freshman guard got tangled up with Ward chasing a loose ball, fell and appeared to twist his left leg while sliding to a stop. He writhed in pain and had to be helped to the locker room. He was able to return minutes later, however.

Dread entered the afternoon averaging 8.4 points per game, and his 28.3 minutes per game were fourth on the team.

Michigan State: The Spartans are getting by just fine without Langford, who missed his fourth straight game with an ankle injury. In his place, a handful of Spartans have provided scoring depth, including Ahrens, Aaron Henry and McQuaid.

Penn State: The Nittany Lions are in desperate need of some positivity. Their 0-6 start in the Big Ten is their worst since the 2014-15 season, when they finished 4-14 in conference play.