The Spartans put all that behind them and finished the regular season on a high note.

Payton Thorne threw two touchdown passes and ran for another to lead No. 12 Michigan State to a 30-27 victory over Penn State on Saturday.

Kennett Walker III rushed for 138 yards and a touchdown on 30 carries as the Spartans (10-2, 7-2 Big Ten) bounced back from last week's 56-7 loss to Ohio State. Michigan State finished undefeated at home for the first time since 2015.

"At the end of the day, it really comes down to mental and physical toughness," coach Mel Tucker said. "That's a big part of it." 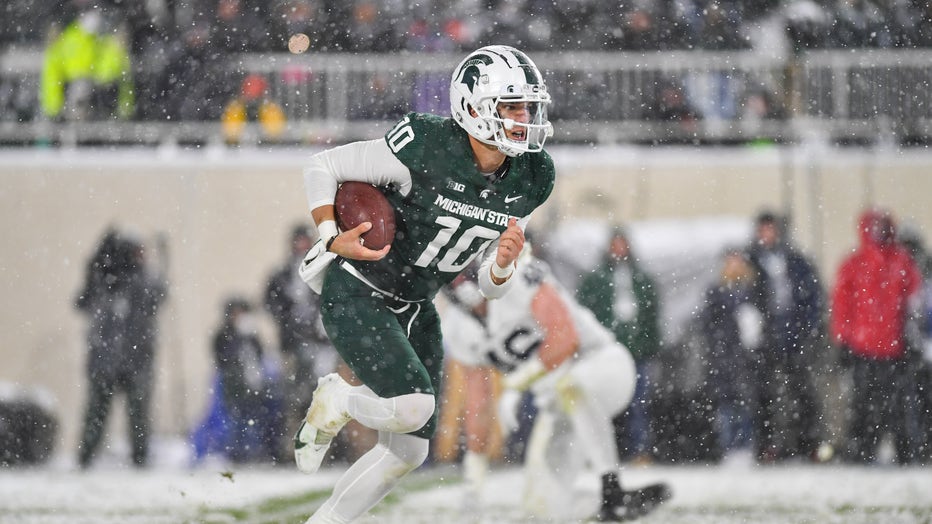 "Overall, I thought that we did a decent job of containing (Walker) for most of the game. But there were critical stops that we needed at important times throughout the game that we weren't able to make," Penn State coach James Franklin said.

Walker was questionable to play after leaving the Ohio State game early due to an ankle injury. He instead took on a workhorse role.

"After the Ohio State game we watched the film and then it was like, ‘On to the next,’ " Walker said. "It's just how we've done it all season."

Thorne connected with Jayden Reed on a 20-yard scoring pass on a fourth-and-15 with 5:10 left to give Michigan State some cushion.

Reed made a leaping grab over a defender.

"He comes up with big plays every week, it seems," Tucker said. "Fourth- down conversions are a big part of the game."

Clifford threw to Parker Washington for a 15-yard TD in the final minute. He passed for 313 yards but the running game was limited to 61 yards on 26 carries.

"We tried to mix in the run game all day long," Franklin said. "Obviously, we weren't able to run the ball consistently enough."

The Spartans scored touchdowns on their first two possessions, including a 99-yard drive, and led 17-14 at halftime.

He added to his resume on Saturday with 138 rushing yards, giving him 1,636 yards for the season. He added his 18th rushing touchdown this season. He did that on a snow-covered field that limited his options.

"It's harder to cut, so you know you've got to get the tough yards between the lines," he said.

Penn State dealt with major flu issues in its program during its last game, a 28-0 win over Rutgers. It was the Spartans' turn this time, though most of their regulars suited up.

"We had to shuffle some lineups during the week," Tucker said. "We weren't exactly sure who was going to answer the bell but we knew the guys would play if they could. And we knew we'd get everything that they had."

Penn State's Dotson caught eight passes for 137 yards and two scores. He finished the regular season with 91 receptions for 1,182 yards and 12 touchdowns.

The Spartans showed resiliency after their 49-point loss at Ohio State and put themselves in position for a New Year's Day bowl. Tucker, who agreed to a 10-year contract extension earlier in the week, had his team ready to go as it scored on its first two possessions. The Spartans' defense didn't allow a point in the second half until the final minute.

Both teams are headed to bowls.