“Aaron Henry is playing some of his best basketball," Izzo said. “He’s starting to become a complete player. I’m really proud of Aaron and how he’s handled everything." 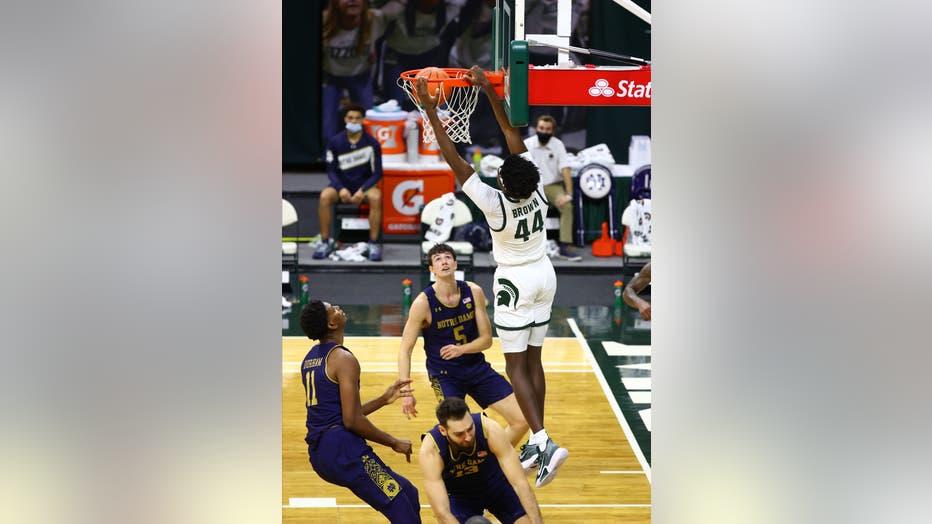 EAST LANSING, MI - NOVEMBER 28: Gabe Brown #44 of the Michigan State Spartans dunks the ball in the first half of the game against the Notre Dame Fighting Irish at Breslin Center on November 28, 2020 in East Lansing, Michigan. (Photo by Rey Del Rio/G

Michigan State (2-0) closed the first half with a 17-0 run over seven-plus minutes and scored the first nine points of the second half to take a 22-point lead.

The Fighting Irish got off to a strong start in their opener and led 26-22 before going scoreless for nine-plus minutes, a drought that started in the first half and carried over to the second.

“It’s a great example of how fragile the game is," Notre Dame coach Mike Brey said. We had some careless turnovers."

Michigan State had a lot to do with Notre Dame's struggles offensively.

The tall, deep and athletic team had 10 blocked shots and six steals in the first half and finished with 12 blocks and nine steals.

“We were everywhere and we wore them down a little bit," Izzo said.

Joey Hauser had 10 points, 12 rebounds and four assists in his second game with the Spartans after sitting out last season following his transfer from Marquette.

“I just felt a lot more comfortable," he said. “I kind of got my feet under me."

“They've got a lot of bodies," Brey said.

Notre Dame's Prentiss Hubb had 23 points and Cormac Ryan had 13 points on 3 of 12 shooting in his first game with the school since transferring from Stanford and sitting out last season.

“For Cormac just to be out there and find a rhythm at times was good for him," Brey said.

Nate Laszewski had 12 points and nine rebounds, and Dane Goodwin added 12 points for the Irish, who outscored Michigan State by three points in the second half.

Notre Dame: The Irish led the country last season as they averaged 1.68 assists for every turnover and got off to a rough start with those statistics in the first half when the game was lost. Notre Dame had seven turnovers and six assists over the first 20 minutes.

“It’s a great teaching moment for our group about how a game can get away from you if you’re careless with the ball," Brey said.

Michigan State: Watts came off the bench and provided a spark Izzo wants and needs from the sophomore guard, who can score as well as create offensive opportunities for teammates. He is also a strong defender.

The Spartans will likely move up in the

Brey is still hoping junior guard Trey Wertz, a 6-5 transfer from Santa Clara, can play this season. Notre Dame is petitioning the NCAA for immediate eligibility.

“We’ll continue to work to get Trey eligible," Brey said. “We could use his body."

Michigan State plays at No. 9 Duke on Tuesday night as part of the Champions Classic.