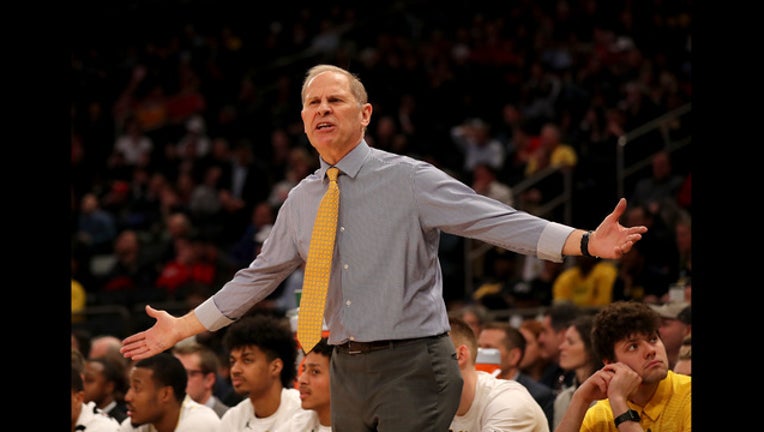 NEW YORK, NY - MARCH 01: Head coach John Beilein of the Michigan Wolverines reacts to a foul against one of his players in the first half against the Hawkeyes during the second round of the Big Ten Basketball Tournament. (Photo by Elsa/Getty Images)

NEW YORK (AP) - With Michigan's stars saddled with foul trouble, and the shots just not falling, the 15th-ranked Wolverines got a lift from their senior sixth man to survive their Big Ten Tournament opener.

Duncan Robinson made Michigan's only field goal in overtime, a go-ahead 3-pointer with 2:15 left, and the Wolverines overcame an assortment of issues to beat Iowa 77-71 on Thursday to move on to the quarterfinals.

"I'm proud of our guys, because it was not - if you just look at the stat lines, the only way we could win that game was defense," Michigan coach John Beilein said. "The foul shots didn't go in, The 3s didn't go in. I think one guy made a 3."

"It's a good screen by Jon (Teske) and a good pass by Charles (Matthews)," said Robinson, who finished with 11 points. "It all stems from teammates and coaches giving me confidence to step up and take that shot in the first place."

The Wolverines made just enough free throws to hold off the Hawkeyes (14-19), who got a basket from Luka Garza on their first overtime possession and not another one.

"He did what a senior is supposed to do," Muhammad-Ali Abdur-Rahkman said. "Step up and make plays at the end."

Jordan Bohannon made a 3 off the dribble with 16.3 seconds left in regulation to tie it at 67 for Iowa, which trailed for much of the second half.

"Give them credit, but I'm just so pleased with how we fought back and got into overtime," Iowa coach Fran McCaffrey said.

Michigan's leading scorers, Moe Wagner and Abdur-Rahkman, were both saddled with foul trouble. Wagner fouled out with 4:37 left, having played only 15 minutes and scoring 11 points. Abdur-Rahkman fouled out with 2:34 left in overtime, having scored nine points in 22 minutes.

Wagner picked up his fourth foul with 9:52 left - a call that stoked the ire of many of the Michigan fans at the Garden - on what turned out to be a three-point play for Ryan Kriener. That cut Michigan's lead to 53-51. Michigan had missed its first 12 3-point attempts, when Robinson found the range from deep. First, the senior dropped in a 3 from the right corner, holding the follow-through for a beat, to make the score 56-51.

On Michigan's next possession, Robinson swished a 3 from up top to push the lead to eight.

Iowa: It was quite a few days for Bohannon. He gained national attention last weekend by missing a free throw on purpose to keep from breaking a school record held by the late Chris Street. Bohannon then scored 25 points against Illinois to lead Iowa to an opening victory on Wednesday in New York. He finished 3 for 14 for 11 points against Michigan, but his late 3 was the biggest shot of the game for the Hawkeyes.

"Just a couple of different possessions go a different way it could have been a totally different game," Bohannon said.

Michigan: The Wolverines are trying to repeat as Big Ten Tournament champions after a memorable run to the title last year that began with the team's plane crashing during an aborted takeoff from an airport near Michigan's Ann Arbor campus. No one was seriously hurt, but it was a harrowing experience. Michigan made it to Washington for the tournament and proceeded to rip off four victories as an eight seed to secure an automatic NCAA bid.

These Wolverines are already comfortably in the NCAA field as an at-large.

Michigan is 11-0 in its opening Big Ten Tournament games under Beilein.

Iowa: On to next season for the Hawkeyes.

Michigan: The Wolverines lost their only meeting with Nebraska this season, 72-52 in Lincoln.