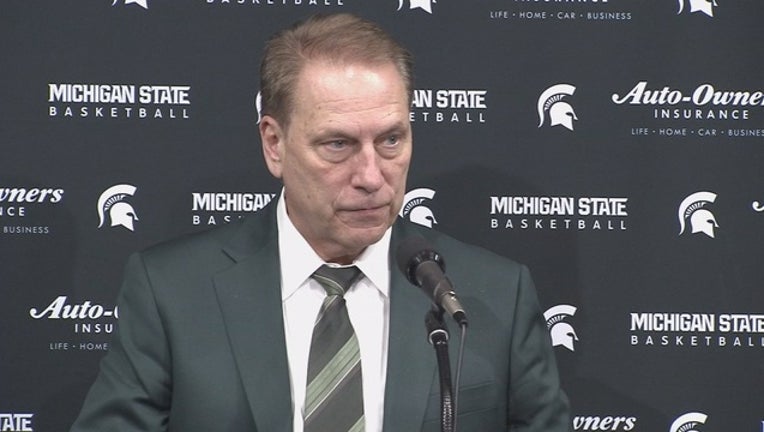 MADISON, Wis. (AP) - No. 2 Michigan State arrived at Wisconsin feeling a little discombobulated with so many off-court issues swirling around the program.

The Spartans are returning to East Lansing with the outright Big Ten regular-season title and more clarity about the future of star forward Miles Bridges.

Cassius Winston scored 20 points and went 6 for 6 from the 3-point line, and Bridges hit two late foul shots to hold off the Badgers for a 68-63 win on Sunday.

The Spartans (28-3, 16-2) celebrated in the locker room after clinching the top seed in this week's Big Ten Tournament in New York. But coach Tom Izzo could sense the weariness among his players, who had some mental lapses against Wisconsin.

"I just think we're a little mentally worn down from all the things they've been through," Izzo said. "Handling the adversity that they've handled I think is going to make them better men for the next 60 years."

It appears that Bridges' short-term future is more secure after he was cleared by the NCAA following a Yahoo! Sports article on Friday that identified him as one of many players who may have received improper benefits. Michigan State didn't get the go-ahead from the NCAA until Saturday, about an hour before the team left for Madison.

"I didn't get anything, that's the truth," Bridges said. "I just want to thank the (Michigan State) compliance office and the NCAA."

The star forward had 10 points on 3-of-15 shooting, missing all eight 3-point attempts.

Winston and Nick Ward, who had 14 points, picked up the scoring slack. Winston's 3 with 4:45 left gave the Spartans a 58-51 lead, a huge cushion in what had been a tight game.

Brad Davison finished with a career-high 30 points for Wisconsin (14-17, 7-11), including a 3 to get within three with 4.7 seconds left that had hometown fans holding out hope for an upset. Bridges sealed the victory with his two free throws.

"It doesn't feel good to lose, but I'm proud of the way these guys fought," said forward Ethan Happ, who had 13 points and six rebounds.

Michigan State: Documents in the Yahoo! story showed that the star forward may have improperly accepted benefits from an agency implicated in a federal investigation into bribery and other misdeeds in college basketball. The team said Saturday that the school's compliance office conducted a "thorough internal review" and presented findings to the NCAA, which then cleared Bridges.

"The research that (the school) did and the NCAA did ... and the fact that the NCAA moved on it quickly, there are reasons that they did," Izzo said Sunday.

Michigan State has also been under scrutiny this season because of the scandal surrounding former university doctor Larry Nassar, who sexually assaulted dozens of girls and young women.

Wisconsin: The team honored three reserve seniors in its final regular-season game, including fifth-year forward Aaron Moesch. He is the last link to the Badgers' back-to-back Final Four appearances in 2014 and '15, a little-used backup on each of those squads. The Badgers' reliance on freshmen to play key roles in the rotation, especially in the backcourt, led to growing pains this season. They've shown signs of maturity of late, winning three straight games before Sunday.

Davison nearly single-handedly brought Wisconsin back, giving the Badgers a huge boost even after aggravating a left shoulder injury. The freshman sprinted to the locker room with a trainer with about 14 minutes left before returning a couple minutes later and checking right back into the game to rousing applause.

"He ran by me to the scorer's table," coach Greg Gard said with a smile. "I guess he was good to go. The trainers didn't stop me from putting him in."

Davison scored Wisconsin's next six points, popping perimeter jumpers to electrify an already vocal crowd. He became the first Wisconsin freshman to score 30 points against a Big Ten opponent since Michael Finley had 30 against Michigan on Feb. 26, 1992.

Yahoo published expense reports listing a $400 cash advance to Bridges' mother as well as a $70 lunch with the player's parents. When asked in the locker room after the game, Bridges said his mother did not receive any benefits.

Bridges said it wasn't hard for him to stay focused on the game "because of my teammates and the great job the compliance office did helping me out. I know my teammates and my coaches have my back all the time."

Michigan State: Opens play in the conference tournament in New York on Friday after earning a double bye as the top seed.

Wisconsin: Locked into the Big Ten tourney as the No. 9 seed, where it will play Maryland on Thursday.