NEWARK, N.J. - No. 3 Michigan State and No. 12 Seton Hall put on a mid-November show worthy of March Madness.

It was showdown of two of college basketball’s best teams and a showcase of two of the nation’s marquee players.

Of course, the eventual hero was a freshman who had failed to score a point in his first two games. That’s college basketball, though.

Freshman Malik Hall hit a layup with 26 seconds to play and scored all 17 of his points in the second half as Michigan State overcame a late five-point deficit to Seton Hall 76-73 Thursday night.

“For a November 14 college basketball game, the atmosphere was great,” Seton Hall coach Kevin Willard said. “It was two high-level teams, with high level players going at it, it was a lot of fun.”

Both Willard and Tom Izzo of Michigan State are going to like what they saw from their preseason All-Americas fighting adversity. Myles Powell of Seton Hall (2-1) had a high ankle sprain and Cassius Winston of Michigan State (2-1) played his second game following the tragic death of his brother, Zachary, last weekend. 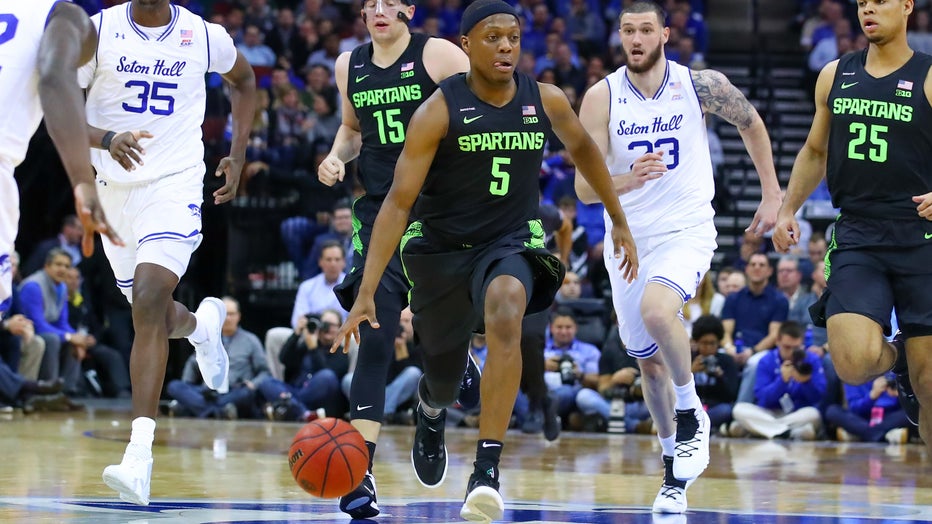 Winston scored 17 of his 21 points in the second half for the Spartans (2-1). Powell scored 37 points in a game most felt he would miss.

“I don’t know who could guard Powell,” Izzo said. “He just did an incredible job. He deserves every accolade he gets, but I’ll tell you what, Cassius Winston does too. It might not seem like it tonight, but to play with a broken heart he has, and to play with the mental part of the game that he’s been through, I think we saw two superstar guards tonight, but in different ways.”

Winston made two free throws with 3.4 seconds to play to give Michigan State its final three-point lead. The Spartans then saw a desperation half-court heave by Powell bounce off the top of the rim as the final buzzer sounded.

Hall, who didn’t score in the Spartans’ first two games, made all seven of his shots, including three 3-pointers. His only missed shots were two free throws with 3:39 to play.

“The kid played terrific,” Willard said of Hall. “Seven of seven and making the shots he made, that was really game. He’s a game changer.”

Powell finished 12 of 27 from the field with six rebounds and two assists.

“I don’t know if God could have stopped him on some of those shots tonight,” Izzo said of Powell.

Trailing 66-62 after Winston hit a 3-pointer with 4:51 to play, Sandro Mamukelashvili hit a 3-pointer to ignite a 9-0 Pirates’ run that Powell ended with his fifth and sixth 3-pointers of the game to give Seton Hall a 71-66 lead with 2:41 to play.

Rocket Watts closed the gap to two points with a line-drive 3-pointer from the right wing with 1:44 to go and Winston, who picked up two early fouls, briefly put the Spartans back in front 72-71 with a 3-pointer with 1:02 left.

Powell, who played 34 minutes on what his coach described as a high ankle sprain he suffered last weekend, gave The Hall its last lead when he hit two free throws with 43 seconds to go.

Hall’s layup put Michigan State ahead 74-73. Mamukelashvili drove the lane and missed a shot on which the officials ignored contact. After Winston missed the front end of a 1-and-1 with 14 seconds to go, Powell drove the lane, drew contact and didn’t get a call.

Willard felt his players were fouled but insisted the officials called a good game.

The game drew a crowd of 14,051, and the fans witnessed a contest with 14 lead changes, nine ties and neither team leading by more than seven points.

Michigan State: The superb Spartans should move up in the AP Top 25 with No. 1 Kentucky’s loss.

Seton Hall: The Pirates are a definite NCAA Tournament team for the fifth straight season.

Michigan State: Hosts Charleston Southern on Monday night in an on-campus game in the Maui Invitational.

Seton Hall: At St. Louis on Sunday to face the 3-0 Billikens.