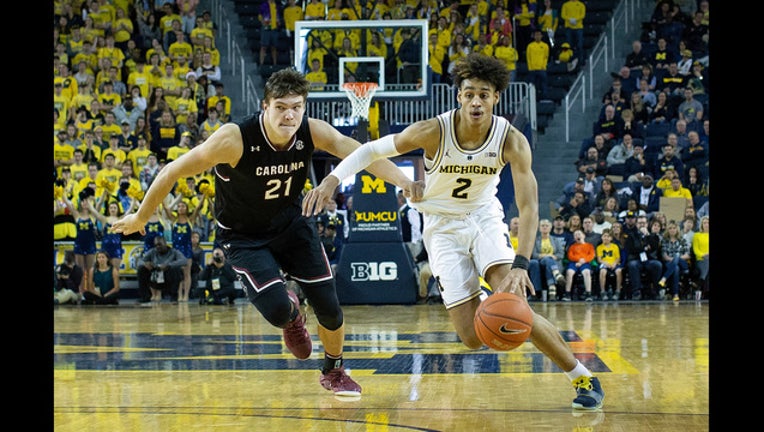 ANN ARBOR, MI - DECEMBER 8: Jordan Poole #2 of the Michigan Wolverines drives the ball to the basket as David Bottenberg #21 of the South Carolina State Bulldogs gives chase during the second half of the game. (Photo by Leon Halip/Getty Images)

ANN ARBOR, Mich. (AP) - South Carolina coach Frank Martin had a simple explanation for why Michigan's Jordan Poole is so tough to defend.

Poole scored 19 of his 26 points in the second half, and No. 5 Michigan remained unbeaten with an 89-78 victory over South Carolina on Saturday. The Gamecocks scored more points than any team all season against Michigan, but the Wolverines were ahead by six at halftime, and they led comfortably for most of the second half.

The Wolverines have won 24 of their last 25 games, with the lone defeat coming in the national title game against Villanova last season.

"We knew coming into the year that we'd have a target on our backs simply because of what we did last year, but we're just taking it day by day, we're locked in at practice, we prepare for the game plan," Poole said. "The coaches do a really good job of keeping us in the moment."

Michigan was coming off its first close game of the season - a two-point win at Northwestern on Tuesday night. The Wolverines were uncharacteristically careless against South Carolina (4-5), turning the ball over 11 times in the first half and 16 in the game.

Poole went to work in the second half with a pair of 3-pointers and a dunk, putting the Wolverines up 56-45. The sophomore guard scored 15 points in the first 10 minutes of the half.

"I just feel like I was letting the game come to me, pretty much, but also being aggressive," Poole said. "I wasn't being aggressive earlier on in the season, I don't think."

Teske had nine rebounds and three blocks. He and Poole are sometimes overshadowed offensively by Brazdeikis and Charles Matthews, but not on this day.

"I love what Jon and Jordan are doing right now," coach John Beilein said. "They're as key as any of the guys that are getting any other type of attention."

Despite the presence of the 7-foot-1 Teske, South Carolina outscored Michigan 44-26 in the paint. Silva said the key is sticking with the offensive plan all the way through each possession.

"Today we took the time, we grew up, we tried to execute to the end," Silva said.

South Carolina: No opponent had shot better than 45 percent from the field against Michigan. The Gamecocks finished at 52 and also won the turnover battle against the Wolverines. South Carolina was done in by fouls. Michigan shot 23 of 30 on free throws while the Gamecocks were just 9 of 14.

"I saw a different gear from our guys," Martin said. "I was real proud that they stepped up to the challenge of playing such a good team."

Michigan: The Wolverines had held every opponent under 40 percent from the floor until their last two games, when Northwestern and South Carolina eclipsed that. So Michigan hasn't been as dominant this week at the defensive end, but the Wolverines had five players score at least 12 points Saturday and won without much drama.

Nobody ahead of Michigan lost this week, although Sunday's matchup between No. 1 Gonzaga and No. 7 Tennessee could affect where the Wolverines end up in the next ranking.

South Carolina: The Gamecocks take a break for exams before hosting No. 4 Virginia on Dec. 19.

Michigan: The Wolverines face their first in-state opponent of the season when they host Western Michigan next Saturday.