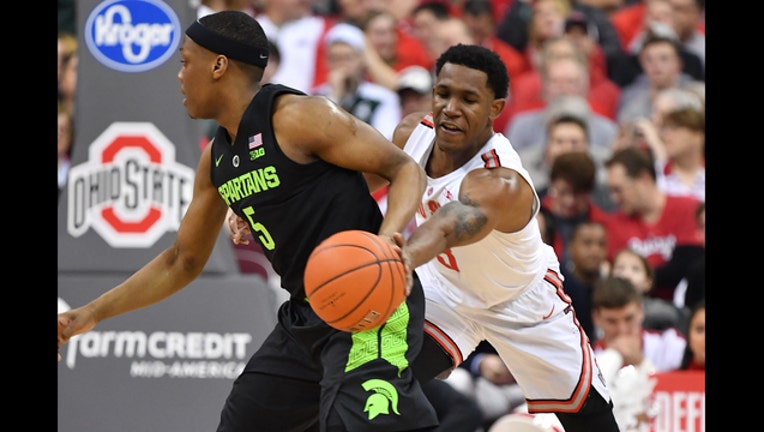 COLUMBUS, OH - JANUARY 5: C.J. Jackson #3 of the Ohio State Buckeyes pokes the ball away from Cassius Winston #5 of the Michigan State Spartans in the first half on January 5, 2019 at Value City Arena. (Photo by Jamie Sabau/Getty Images)

COLUMBUS, Ohio (AP) - Riding a seven-game winning streak, No. 8 Michigan State came to Columbus to play No. 14 Ohio State with captain and scoring machine Joshua Langford sidelined indefinitely with an ankle injury. The team's two other veterans had to pick up the slack.

Cassius Winston scored 18 of his 25 points in the second half, and Nick Ward had 21 as the Spartans rallied and then pulled away late in the second half to beat Ohio State 86-77 on Saturday in a game that was closer than the final score indicated.

The second half was tied six times before the Spartans took the lead on a foul shot by Ward, and a layup by Kenny Goins put them up by three with 3:28 left.

A put-back by Kyle Ahrens at the 2:35 mark, a turnover by Ohio State's Keyshawn Woods and a pair of foul shots by Aaron Henry all but sealed it for Michigan State. Ohio State got to within six points twice in the last minute but couldn't get closer.

"Any time you get a win in this league right now, it's something," Michigan State coach Tom Izzo said. "If you get a road win, it's frosting on the cake, just because of how difficult the league is. The place was hopping today, it was great."

Kaleb Wesson scored 25 points despite being in second-half foul trouble, and Luther Muhammed had 12 for the Buckeyes (12-2, 2-1), who saw a six-game winning streak snapped. C.J. Jackson had 10 points in the first half but then was slowed by a bout with cramps.

Ohio State coach Chris Holtmann wasn't happy with the effort in a second half that saw Michigan State hit 13 of 17 shots from the floor and score 50 points after the Buckeyes had taken a 43-36 lead into halftime.

"We had too many errors there that are costly when you're in league play," Holtmann said. "We're certainly not there yet."

Michigan State: After a first half that disgusted Izzo, the Spartans bore down late and won their first of the new year after going 6-0 in December.

"I thought our experience helped a little bit in the second half," Izzo said. "I was very disappointed in the first half, defensively. I thought we were a joke. We just did not cover. Loose balls, long rebounds, they got everything."

Ohio State: Buckeyes matched Michigan State every step of the way until their shooting went cold and they faltered late. Kaleb Wesson continues to be the featured player on a fairly talented team, but the Buckeyes could use a clone of him to help out.

The Spartans will play for the foreseeable future without Langford, a junior guard who was averaging 15 points per game. He missed his second straight game with an ankle injury.

Izzo said it will take a couple of weeks to see how he responds to treatment. It's not clear when he could return.

The packed house as Value City Arena included sections of Michigan State fans who came to see the Spartans' Ohio natives play. Ward is from the Columbus suburb of Gahanna, and Kyle Ahrens grew up in Versailles, north of Dayton.

Ahrens' younger brother, Justin, is a freshman for the Buckeyes and got into Saturday's game briefly. Kyle had three points for Michigan State.

Ohio State: At Rutgers on Tuesday.