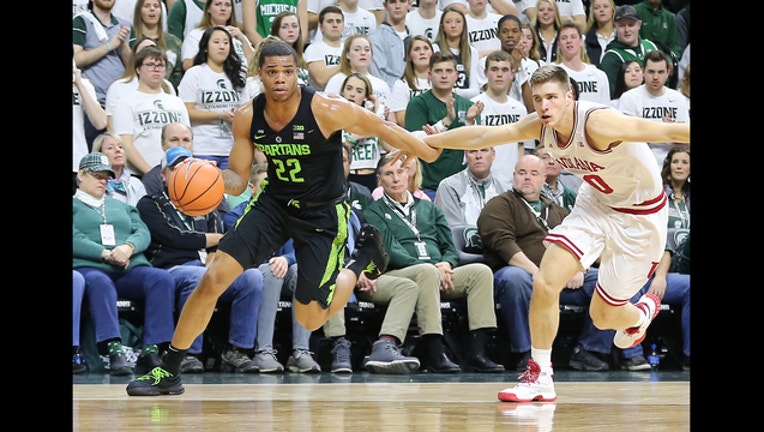 EAST LANSING, Mich. (AP) - Miles Bridges made a 3-pointer and bounced on his toes with joy, enjoying a game he and Michigan State desperately needed.

Bridges scored 22 points to help the ninth-ranked Spartans respond to adversity with an 85-57 win over Indiana on Friday night.

The Spartans (17-3, 5-2 Big Ten) had a confidence-boosting performance after going from a top-ranked team to a reeling one. They were slumping after a 16-point loss at Ohio State, an overtime win over Rutgers and an 82-72 setback to Michigan at home.

Michigan State took control with an 18-0 run midway through the first half, led by as much as 23 and was ahead 42-23 at halftime.

"We were aggressive and played our game," Bridges said. "We had a great sense of urgency."

Nick Ward had 18 points and 13 rebounds, Cassius Winston had 10 points, eight assists and only one turnover and Jaren Jackson had 10 points, six rebounds and three blocks and for the Spartans.

The Hoosiers (11-8, 4-3) lost for the first time in four games, falling into a fourth-place tie with the Wolverines and Nebraska.

Indiana's Robert Johnson had 21 points and the rest of his teammates struggled offensively. Josh Newkirk scored 14, but missed 12 of 17 shots.

"If those two guys can continue to play well, I think we'll be OK," coach Archie Miller said.

The Hoosiers were held to 34 percent shooting.

"It wasn't a good offensive showing and they had a lot to do with it," Miller said.

Alex Rodriguez, who was in Detroit for the North American International Auto Show, attended the game. He wore an "Izzone" T-shirt while standing in the student section behind coach Tom Izzo, his staff and players.

"I've always been a big fan of Izzo," Rodriguez said.

Izzo became very fond of Rodriguez after hearing him talk to his team at its shootaround and in the locker room after the victory.

Rodriguez told the Spartans it bothers him that he ranks fifth on the all-time list with 2,287 career strikeouts.

"He talked about how many times he failed," Izzo recalled. "What a great message for a team that came off a disappoint week of basketball."

Izzo, like the school's board of trustees, is supporting university president Lou Ann Simon. Simon is facing growing calls to resign or to be fired by the board as part of the fallout from how the school handled allegations made against former employee Larry Nassar , who has pleaded guilty to multiple sexual assaults.

"There is no way I can waver in my support," Izzo said.

Indiana: The Hoosiers have to hope Juwan Morgan's injury is not a long-term problem. He hurt his left ankle left in the first half, didn't return and left the locker room on crutches. One of the Big Ten's leaders in scoring, rebounding, steals and shooting was limited to two points on 1-of-5 shooting, three rebounds and one steal in 16 minutes.

"Even when Juwan was in there, we didn't have anything going," Miller said.

Miller said Morgan will be evaluated again when the team returned to Indiana.

Michigan State: The Spartans desperately needed to get their swagger back and they did, suddenly looking like the team that was ranked No. 1 two weeks ago.

Michigan State: Plays at Illinois on Monday, one of seven road games during the final 11 games in the regular season.