OTTAWA, Ontario - OTTAWA, Ontario (AP) — Josh Norris scored three goals for his first career hat trick and the Ottawa Senators completed a sweep of their home-and-home series with the Detroit Red Wings with a 5-2 win Sunday.

Artem Zub and Nikita Zaitsev also scored for the Senators, and Anton Forsberg made 30 saves.

The 22-year-old Norris, who reached the 30-goal milestone for the first time in his young NHL career, also scored in Ottawa's 5-2 victory in Detroit on Friday night.

Norris is Michigan native who grew up cheering for the Red Wings.

"Definitely a little bit extra special," Norris said of getting his hat trick against Detroit.

Norris, who said he hadn't had a three-goal game since his peewee hockey days, reached 30 goals for the season with an empty-net goal.

"I try to play my best every night and let the results take care of themselves," Norris said. "It’s a long year and a lot of ups and downs, so I try not to get too far ahead of myself and just be in the moment and do the best that I can. You definitely don’t get to 30 without some great teammates and linemates." 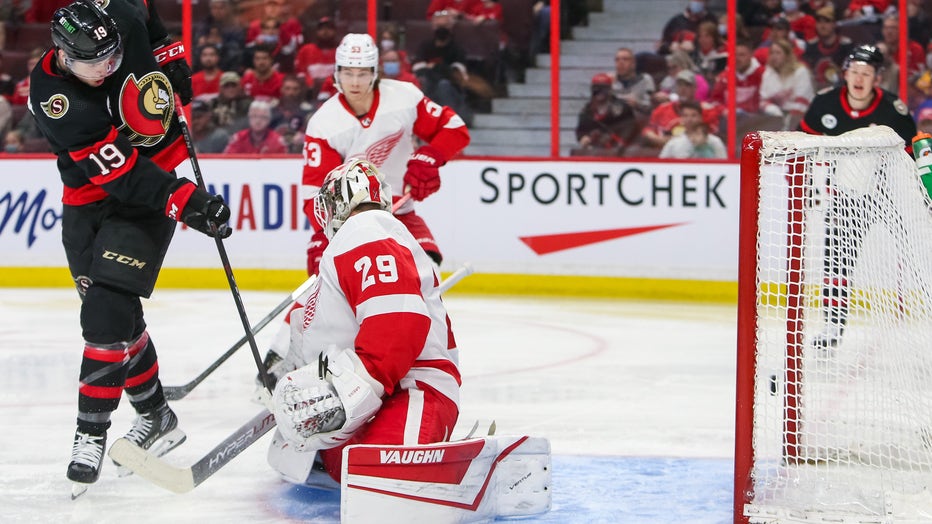 OTTAWA, ONTARIO - APRIL 03: Josh Norris #9 (not shown) of the Ottawa Senators scores on Thomas Greiss #29 of the Detroit Red Wings as his teammate Drake Batherson #19 looks on in the second period at Canadian Tire Centre on April 03, 2022 in Ottawa,

"There’s no doubt that right now we’re beat down mentally," Detroit coach Jeff Blashill said. "Now, that’s not an excuse. We’ve got to fix that, but that’s the reality of it and we’ve got to climb our way out of it."

The Senators honored late owner Eugene Melnyk before the game. Melnyk, 62, died last Monday after a lengthy illness. The tribute included a video montage of Melnyk through the years since he purchased the Senators in 2003. Players will wear a commemorative patch with the initials "EM" on their jerseys for the rest of the season.

"I think it was special for us to win that game," Senators coach D.J. Smith said. "Just honoring him and being able to leave the building a winner, on his night, I think is special."

Ottawa forward Tyler Ennis left early in the second period and didn't return after he was hit by Gustav Lindstrom. The teams announced Ennis is likely done for the season. It was the 700th NHL game of Ennis' career.

Detroit opened the scoring at 7:21 of the opening period when Rasmussen slipped the puck through Tim Stutzle’s legs and beat Forsberg to the blocker side.

Zub beat Greiss through the legs to tie it at 1 with less than two minutes remaining in the first.

Norris scored twice in the second period to give the Senators a 3-1 lead after 40 minutes. His first goal came on the power play off a feed from Stutzle. Norris beat Greiss to the blocker side from the left faceoff circle at 2:32. Norris’ 15th power-play goal this season made him the first Senators player to reach that mark since Dany Heatley in 2008-09.

He scored his second goal at even-strength at 14:16 when he jumped on Nick Holden's rebound from the slot.

Trailing 3-1, Larkin gave the Red Wings some life with a pretty goal off his backhand with just over seven minutes remaining in regulation.

But Detroit failed to capitalize on a number of good chances during a power play in the final minutes of the game. Norris and Zaitsev sealed the win with empty-net goals.

"We didn’t create enough again," Larkin said. "We didn’t make it hard enough on their goalie. But we’re right there."

NOTES: The Red Wings were without LW Tyler Bertuzzi, who's unable to travel to Canada because he’s unvaccinated.

Senators: Travel to Montreal to take on the Canadiens on Tuesday night.