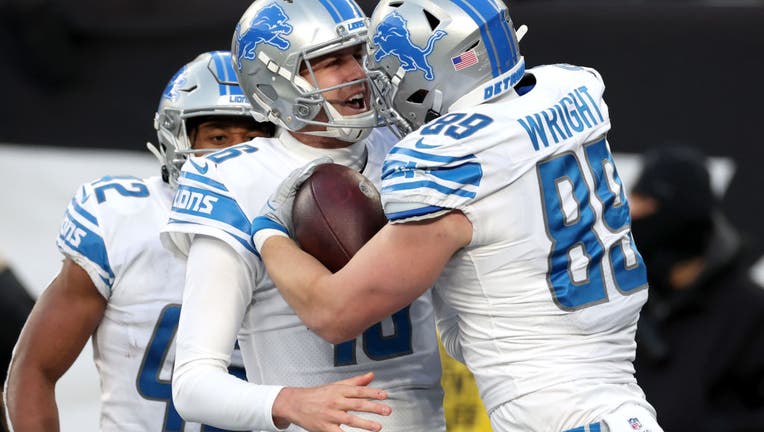 DETROIT (AP) - These aren’t the games the Detroit Lions win in December.

At least not usually.

They didn’t trail the New York Jets on Sunday until Zach Wilson threw a touchdown pass to C.J. Uzomah with 4:34 left in the game. That put the Jets up 17-13 and set the stage for a typical late-season loss.

Yes, Matthew Stafford pulled out several, but so many have ended with futile mistake-filled final drives.

When the Lions started at their 22, tight end Brock Wright was wide open on first down and dropped the ball. Same old Lions, right? The next two plays went for 18 yards to Detroit’s most explosive players – D’Andre Swift and Amon-Ra St. Brown – but the next three went for 9 and took the game to the two-minute warning.

On fourth-and-1 from Detroit’s 49, many teams would roll out, but Jared Goff isn’t exactly nimble. A misdirection run, perhaps? Coach Dan Campbell and offensive coordinator Ben Johnson would want the ball in the hands of Swift or St. Brown.

That is, indeed, what they wanted. What they got was even better.

Goff dropped back to pass, but the Jets had St. Brown covered. However, Wright had faked a block on the right side of the formation before drifting across the field. No one noticed other than Goff.

RELATED: The Detroit Lions' path to the playoffs

Wright had started the drive with a blunder. This time, though, he caught the ball without a defender in sight. It was one of the easiest 51-yard touchdown passes in Lions history.

"I expected the ball to come to me and that I’d make the catch," Wright said. "I was just thinking about the first down, but when I saw how open it was, I was thinking, ‘End zone, end zone!’"

That and the 20-17 victory also showed how far the team has come since replacing Matt Patricia with Campbell for the 2021 season.

"Winning in this league is always a good thing," Campbell said Monday. "Every good team I’ve been a part of has done a couple things — you win multiple games at multiple times during the season, which we’ve done. We’ve won three in a row two different times.

"And you win on the road, and we’re figuring out how to do that. Our guys are playing good football right now."

And, at 7-7 after a 1-6 start, the Lions are in a playoff race as Christmas approaches.

"We told them after Thanksgiving, we had a six-game season to play," Campbell said. "We’ve won the first three, but now we have to be just as good for the last three."

Jared Goff on Lions 6th win in the last 7 games

Dan Miller sat down with Lions quarterback Jared Goff on Monday for an exclusive chat about the team's big road win against the Jets and their continuing success.

The Lions’ run defense was a disaster early in the season, allowing an average of 161.3 yards in the first nine games. In the next five, that has been down to 84. And in the last two, they’ve only given up 72 yards on 39 carries to the Vikings and Jets.

The pass defense still isn’t getting the job done. Wilson only completed 18 passes Sunday, but turned them into 317 yards – an average of 17.6 yards per completion. Campbell stressed again Monday that the Lions can’t keep giving up "chunk" plays through the air.

Kalif Raymond caught five passes for 53 yards — about an average day for him — but his 47-yard punt return touchdown in the first quarter gave the Lions a lift after a slow start. It was the first score on a return in his seven-year NFL career.

Jamaal Williams was huge for the Lions early in the season, scoring 14 touchdowns in the first 12 games. Against Minnesota and the Jets, though, he carried 29 times for 70 yards, an average of just 2.4 yards per carry, and didn’t score.

The Lions sustained one key injury Sunday in the worst possible spot: the secondary. Starting safety DeShon Elliott was still undergoing tests on his shoulder Monday, and the team doesn’t have an obvious replacement. Veteran C.J. Moore finished the game, but he’s a special teams ace more than a regular safety. Converted cornerback Ifeatu Meilonwu has only played six defensive snaps this season.

93 — The number of points scored in Detroit’s 48-45 loss to Seattle in Week 4. Right now, the Lions and Seahawks are tied for fourth place in the NFC wild-card race at 7-7, a half-game behind the Washington Commanders, but the Seahawks have the tiebreaker because of that victory.

Find a way to stop Carolina starter Sam Darnold, who has gone 2-1 since returning to the starting lineup. He’s averaging 13.1 yards per completion and has thrown three TDs without an interception — just the type of quarterback who can hurt Detroit’s struggling secondary.