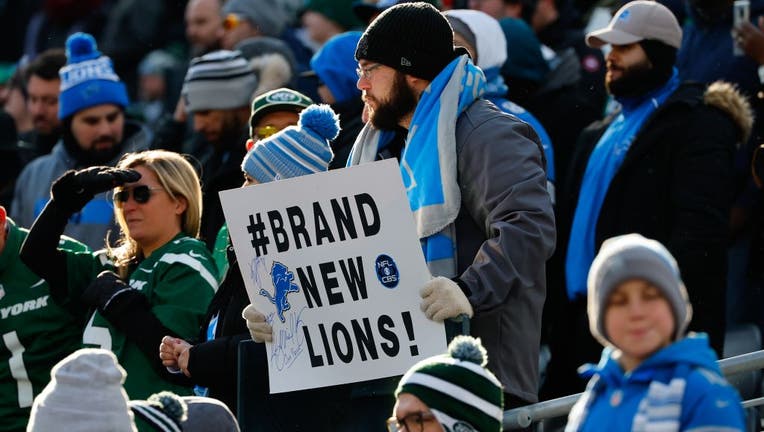 EAST RUTHERFORD, NJ - DECEMBER 18: Detroit Lions fan in the stands holds up a sign that says # Brand New Lions prior to the National Football League game between the New York Jets and the Detroit Lions on December 18, 2022 at MetLife Stadium in East

The Detroit Lions were the talk of the NFL back in August. There was a pulse coming out of training camp after HBO's Hard Knocks finished. Then the season started and by the end of October, Detroit sat at 1-6 and looked destined for another last place finish in the north. Then it all changed.

Many of those first six losses weren't as bad as they may have seemed on their surface - except for Dallas and New England, those were some bad losses - but the offense was the top offense in the league.

The Lions lost 5 straight, traded tight end T.J. Hockenson to the Minnesota Vikings for a couple of draft picks, and appeared to be headed towards another year of the rebuilding process.

On Nov. 6, Aaron Rodgers came to town and the Lions beat the Packers 15-9. Consider the switch flipped. After starting 1-6, the Lions have now gone 6-1 – with the only loss coming to the AFC-best Buffalo Bills on a field goal with 25 seconds left on Thanksgiving Day.

Suddenly, the Lions are set up for a shot at an NFC wild card spot. Here's how they'll get there.

Where are the Lions in the NFC playoff hunt?

Lions fans, you're probably not ready for this. You're about to read something you haven't thought about in eight years - the Lions are in contention.

Ok - everyone knows that now.

The Lions (7-7) won't win the NFC North. The Minnesota Vikings (11-3) sewed up the division this past weekend. But Detroit is the 9th seed in the NFC Wild Card spot and have a good shot of climbing up this week.

They have the same record as the Seattle Seahawks - a team they lost to earlier in the year - but it's not unthinkable to believe they Lions can jump them as soon as Christmas Eve.

How can the Lions get a wild card spot?

This weekend, the Lions have a winnable game against the Carolina Panthers - in Charlotte. So that's by no means a gimme - but the Lions are favored by 2.5 to win.

Seattle, meanwhile, goes to Kansas City to face the Chiefs - the second-best team in the AFC. Assuming Kansas City and Detroit both take care of business, that moves the Lions up a spot to no. 8.

Not only that, the Commanders play at San Francisco - the team with the best defense in the entire league. If Detroit wins and both Washington AND Seattle lose - the Lions are suddenly controlling their own destiny as Detroit would be sitting as the no. 7 seed in the NFC playoff hunt with two games left.

What is the Lions schedule to end the year?

Even if those scenarios don't play out, the Lions are in good shape at a playoff spot.

At this stage, the Lions are basically a coin flip on whether they'll make the playoffs. The secret to making it though?