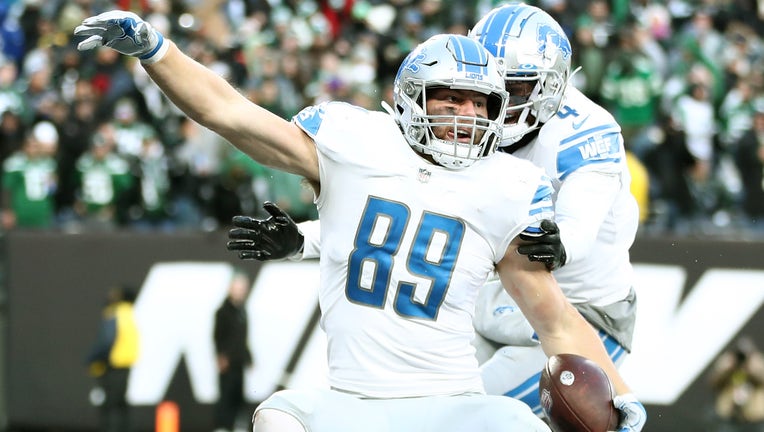 DETROIT (FOX 2) - It wasn't pretty. It wasn't easy. But a win is a win - and for the Detroit Lions, it's another Monday to enjoy another win.

The high-powered Lions offense struggled to score against a tough New York Jets defense but when they needed a touchdown, with less than two minutes in the game, they found a way.

The Lions were down 17-13 and facing a 4th-and-1 at their own 49-yard-line and 2:00  left in the game. The offense had not scored a touchdown in the game - the lone score for the Lions at that point was a Kalif Raymond punt return for a TD - and they needed a yard to keep the drive moving. They got a lot more.

Jared Goff connected with tight end Brock Wright for a 51-yard catch and run for six. The play call cleared defense to Goff's left where he found a wide open Wright three yards past the line of scrimmage. Not a single Jet was within 15 yards. Wright wasn't touched until he got to the four yard-line and dragged a defender with him.

The Lions added the extra point and asked the defense to step up.

On fourth-and-18 with the game on the line from their own 40, QB Zach Wilson rolled to his right and completed a 20-yard pass to Elijah Moore for a first down. Robert Saleh then called a timeout with 1 second remaining.

Lions fans have seen this before - you think you win and then…soul-crushing defeat. Not this week.

The Jets (7-7) sent out Greg Zuerlein for a potential tying 58-yard field goal, but his kick went wide left.

That sent the Lions (7-7) to their third straight win and sixth in their past seven games and the playoffs are now within reach.

Head coach Dan Campbell said this is what good teams do.

"I don't care who you're playing, man, to win in this league is a good thing. I don't care who it is. Every good team I've ever been a part of you win multiple games at multiple points in a season, which we've done. We won three in a row two different times, and you win on the road, which we're figuring out how to win on the road, so Um, you know, and that's not by accident or guys are playing good football right now," Campbell said.

Jared Goff on Lions 6th win in the last 7 games

Dan Miller sat down with Lions quarterback Jared Goff on Monday for an exclusive chat about the team's big road win against the Jets and their continuing success.

Despite not having their best game of the year, the key for this game was that the Lions found a way. That in itself is a sign of this team's growth.

"To be very disciplined in those moments, you know, that's that's what the winning teams do. That's what players that can produce in high stress situations do and we were able to do that, even though there were bits and pieces of that game that that weren't up to our standards, man when we needed it, we made those plays," Campbell said.

So, celebrate the win and get back to work. On Christmas Eve, they're at Carolina will they go for four straight road wins.