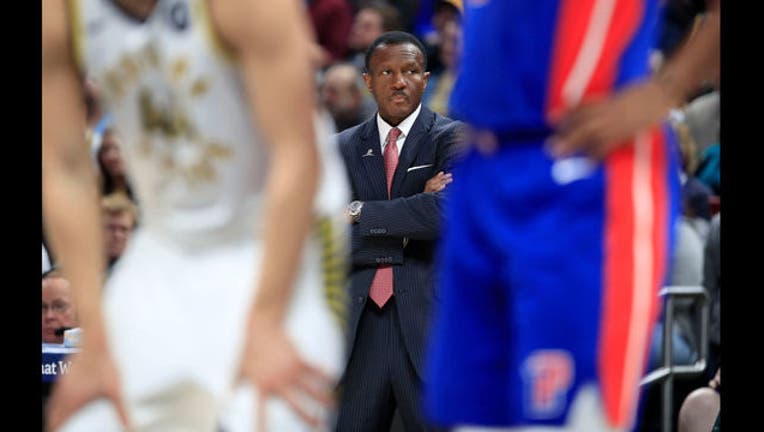 They fought for position, repeatedly challenged Andre Drummond in the middle and made big play after big play.

Indiana's two tallest players combined to score 35 points and grab 18 rebounds, and Turner added five blocks to help the struggling Pacers snap a three-game losing streak with a 111-102 victory over the Detroit Pistons.

Indiana desperately needed a win after losing seven of its previous eight and its grip on home-court advantage in the first round of the playoffs.

The Pacers did it by essentially battling to a rebounding draw, holding a 52-34 scoring advantage in the paint and taking the constant cues from Sabonis and Turner.

Sabonis finished with 18 points and 12 rebounds before fouling out midway through the fourth, while Turner added 17 points, six rebounds and three steals. Thaddeus Young and Bojan Bogdanovic each scored 19 to lead the Pacers.

But Monday's victory hasn't changed anything in the standings yet.

The Pacers remain tied with Boston, a 110-105 winner over Miami, for the No. 4 spot in the East. The Celtics still hold the tiebreaker with the teams meeting in a potentially decisive game Friday in Indianapolis.

"We knew March was going to be tough, but it's a new month now," Doug McDermott said after scoring 11 points. "I think we're all locked in and we're engaged with an important couple of games here to determine where we'll be playing come playoff time."

The Pistons are in a similar position after having their two-game winning streak snapped. They started the game 7 of 11 on 3-pointers and built a 33-23 lead after one quarter.

They couldn't keep it up, though, and missed a chance to move closer to clinching their first playoff spot in three years because Brooklyn, Miami and Orlando also lost. The results assure Detroit of losing no ground in the No. 6 spot.

But they allowed a potentially crucial win to slip away.

"Loose balls, 52 points in the paint, those are things that break your back," coach Dwane Casey said. "Again, the physical, hard things, we didn't do them hard enough on the road and now we have two more days to turn things around."

Sabonis spurred the Pacers' first-half turnaround with 14 points in 13 minutes as the Pacers built a 59-55 halftime lead.

Casey knows what the Pistons must do to win over the fan base: Win with effort. And he believes Detroit is making progress.

"We're not at a championship level yet, but we're building to get there," Casey said before the game. "We have to earn it (fans' respect). They're not going to give it to us."

Pistons: Try to win their 11th straight home game Wednesday against the Pacers.

Pacers: Will try to snap a 10-game road losing streak in the rematch.