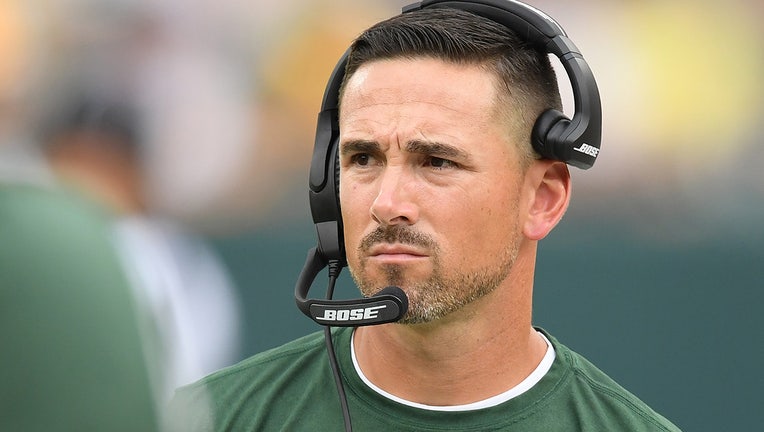 GREEN BAY, WISCONSIN - AUGUST 21: Head coach Matt LaFleur of the Green Bay Packers looks on in the first half against the New York Jets during a preseason game at Lambeau Field on August 21, 2021 in Green Bay, Wisconsin. (Photo by Quinn Harris/Getty

GREEN BAY, Wis. - Coach Matt LaFleur has one simple request for Green Bay Packers fans. Basically, LaFleur wants them to do away with something that should have been done away with in, oh, 1994.

That would be none other than "The Wave." When the Packers have the ball, LaFleur said, perhaps fans can refrain from partaking in that little slice of American sports history.

"We’re going to have some talks with some people in our building about how we can help educate our fans in certain situations," LaFleur told reporters. "But I love our fans, first and foremost. I think we have the best fans in the National Football League. The support they show when we’re at home, when we’re on the road, is second to none. So, I always want to start out with that before I become critical of them."

RELATED: Check out the new and improved FOX Sports app

LaFleur then made his request, oh so delicately.

So, other than the coach of one of the most ardently supported franchises asking fans to tone it down, how can the Packers wave goodbye to this fairly lame form of cheering?

Well, LaFleur mentioned the possibility of subtle reminders via the large video scoreboard at Lambeau Field. "Hopefully, some of our players will volunteer" to spread the word, LaFleur said.

Packers quarterback Aaron Rodgers backed his coach, citing memories of fans doing The Wave during a 31-12 blowout of the Miami Dolphins. Rodgers suggested that fans don’t necessarily need to stop altogether — but rather pick their spots.

"It’s OK when it’s 31-12," Rodgers said. "It’s not that big of a deal. If it was 31-all, maybe take it easy. I think they get a little bored maybe sometimes, and they’re like, ‘What are we going to do here?’ Because I was watching from the sideline at one point, it was in the third quarter, and I saw like four people right across from me — this would be about behind their bench from the 40-yard line — kind of stand up and do it.

"And I was thinking to myself, ‘I bet you they’re going to do it when we’re on offense.’ And they did, and we love them."