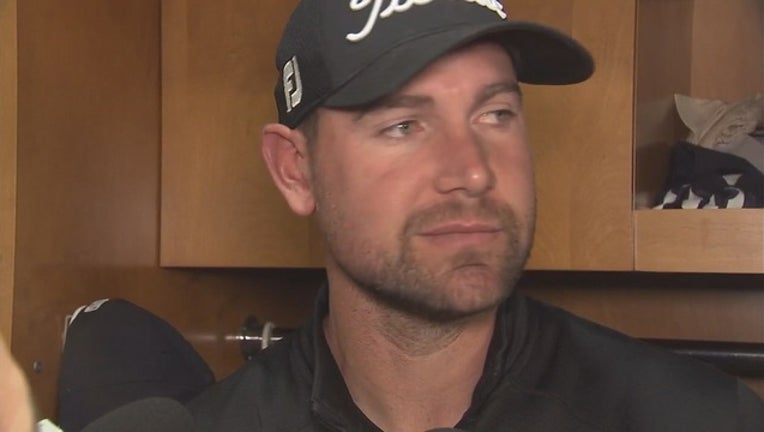 OAKLAND, Calif. (AP) - Mike Pelfrey can point to a lot of good things that happened Sunday. He's not going to point a finger at Ian Kinsler though.

Pelfrey (0-5) remained winless despite not allowing an earned run in the Detroit Tigers 4-2 setback to the Oakland Athletics in the series finale.

"I didn't start the sixth too well with the walk, but the guys turned the double play on Vogt for me," Pelfrey said. "Then the error happened. In my mind, he's the best second baseman in the game and makes that play every day. Obviously that stuff happens but he brings it every day. That's the way it goes."

Kinsler was disappointed in himself.

"Baseball is a funny game. You lose focus for one second and stuff like that happens," he said. "Pelfrey pitched well and we were trying to get him over the hump and let him pitch deep into the game. To not come up with that, it hurts a little bit."

Pelfrey retired the first two hitters of the inning before Danny Valencia and Khris Davis each singled ahead of Kinsler's miscue on Yonder Alfonso's grounder.

Pelfrey, charged with the three unearned runs on six hits, was replaced after walking Marcus Semien to load the bases. He walked two and struck out three overall.

"The one thing that bothers me more than anything is the sixth inning," Pelfrey said. "For some reason I'm having trouble getting through the sixth inning. That bugs me."

Rich Hill, who left the game with a slight groin strain, went 6 1/3 innings to win his fifth straight start. Hill (8-3) gave up two runs on five hits, walking three and striking out nine.

"He's definitely figured something out with his curveball," Kinsler said. "He's commanding it really well this year and he's throwing the ball well."

Victor Martinez, who had three hits, and James McCann drove in runs for the Tigers, who lost for the second straight day, their first losing streak in two weeks.

Tigers: RHP Jordan Zimmerman threw 25 pitches on Sunday and he's scheduled to throw a bullpen on Tuesday, with a possible start on Friday. ... RHP Michael Fulmer will likely get the start on Wednesday against the Angels.

Athletics: RHP Zach Neal will pitch out of the bullpen and LHP Eric Surkamp will likely be recalled to make Tuesday's start against the Minnesota Twins. ... RHP Sonny Gray (right trapezius strain) is on track to throw off the regular mound Tuesday. ... RHP Henderson Alvarez (right shoulder) is scheduled for a bullpen on Monday. ... RHP R.J. Alvarez (right elbow) is scheduled to throw to hitters on Tuesday.

Tigers: RHP Justin Verlander (4-4, 4.02) has the call for Monday night's series opener at the Los Angeles Angels. Verlander won each of his last two starts and is 5-6 with 3.68 ERA in 14 starts against the Angels.

Athletics: RHP Kendall Graveman (1-6, 5.36) gets the start Monday in the series opener against the Minnesota Twins. He's on a five-game losing streak.