MIAMI - The Detroit Pistons had their most dominant quarter in nearly two years. And last season’s NBA Finals trip for the Miami Heat suddenly seems long ago.

Jerami Grant scored 24 points, Derrick Rose had 23 off the bench and the Pistons — the team with the NBA’s worst record — came into Miami and beat the Heat 120-100 on Saturday night, sending the reigning Eastern Conference champions to a third consecutive loss. 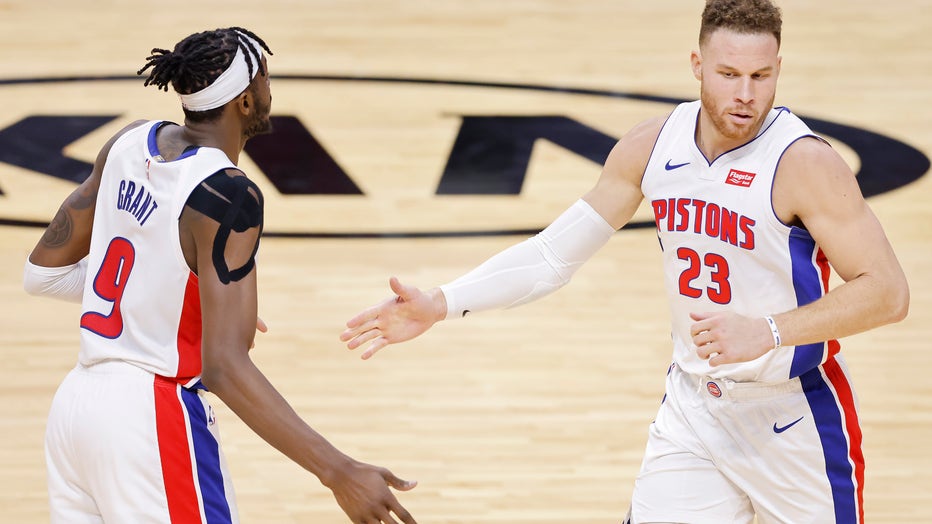 MIAMI, FLORIDA - JANUARY 16: Jerami Grant #9 and Blake Griffin #23 of the Detroit Pistons celebrate after a basket against the Miami Heat during the third quarter at American Airlines Arena on January 16, 2021 in Miami, Florida. NOTE TO USER: User ex

Blake Griffin scored 15 points for Detroit, which outscored Miami 38-19 in the third quarter to turn a four-point halftime deficit into a game fully under Pistons control. It was the biggest margin the Pistons outscored an opponent by in their last 331 quarters, going back to April 9, 2019.

Bam Adebayo scored 28 points for Miami, which got 22 from Duncan Robinson, 16 from KZ Okpala and 12 from Goran Dragic.

It was a no-doubter in the second half. The Pistons eventually led by 23, their biggest lead in any game so far this season. Miami has trailed by at least 23 points in four of its first 11 games; that happened in four of the 73 Heat regular-season games a year ago.

The Heat got six players back — including Adebayo, Okpala and Dragic — from the NBA’s health and safety protocols list, all after missing time because contact tracing said they may have been exposed to someone who tested positive for COVID-19.

Pistons: Rose returned after missing Detroit’s last two games with left knee soreness. ... Before Saturday, Detroit’s last quarter that was won by 19 or more was the fourth against Memphis in the next-to-last game of the 2018-19 season. The Pistons outscored the Grizzlies 36-14.

Heat: Robinson got credited for what officially is his fifth career dunk, the first that happened at AmericanAirlines Arena. ... Okpala got his first NBA start.

The lineup has constantly been in flux — eight starting units so far — but the Heat are still off to a 4-7 start and looking up at what would be the six guaranteed playoff and four play-in spots in the East. Only seven of the team’s 33 seasons have started worse through 11 games.

The Pistons have plenty of Miami ties. They started former Heat guard Wayne Ellington, had Delon Wright — brother of Dorell Wright, a 2006 NBA champion with the Heat — come off the bench and have former Heat guard Rodney McGruder on the roster as well. Plus, rookie Saddiq Bey nearly signed with the Miami Hurricanes before choosing Villanova.