DETROIT - Alec Burks scored a season-high 32 points, Saddiq Bey added 28 and the Detroit Pistons overcame the ejection of two players after a scuffle to beat the Orlando Magic 121-101 on Wednesday night and snap a six-game losing streak. "I’m really proud of our guys," Pistons coach Dwane Casey said. "We have had a lot of adversity, and with a young team, it is great to see them play like this."

Burks made his first 10 shots from the floor, including six 3-pointers, before missing a 3-point attempt with 28 seconds left that would have given him a career-high 35 points. He also made all six free-throw attempts.

"I wasn’t going to stop shooting," Burks said. "You don’t expect that to happen, but you have to take advantage when it does." 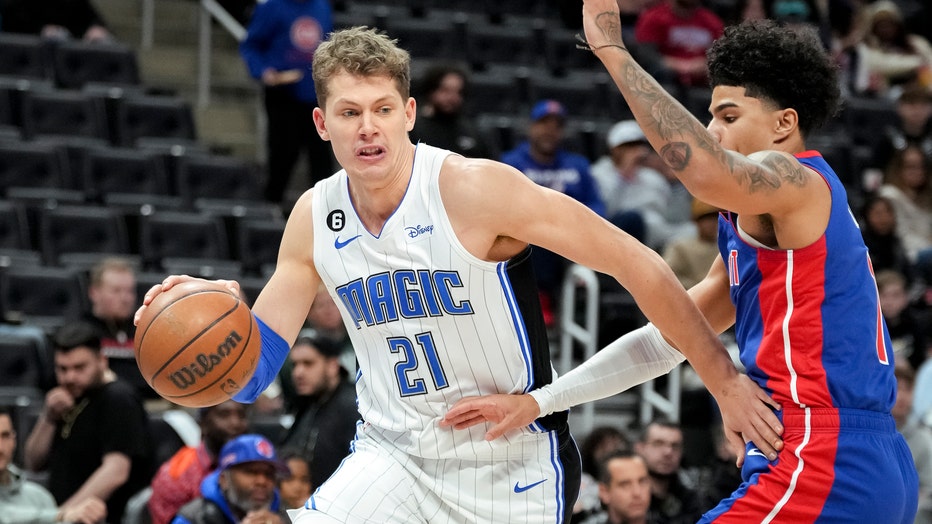 DETROIT, MICHIGAN - DECEMBER 28: Moritz Wagner #21 of the Orlando Magic handles the ball against Killian Hayes #7 of the Detroit Pistons during the first quarter at Little Caesars Arena on December 28, 2022 in Detroit, Michigan. NOTE TO USER: User ex

By hitting his last shot, Burks would have also broken Gary Payton’s NBA record for most points in a game without missing a field goal or free throw. Payton scored 32 points for the Seattle SuperSonics on Jan. 4, 1995, by going 13 for 13 from the floor and 3 for 3 from the line.

Killian Hayes and Hamadou Diallo were thrown out after the fight just before halftime. Moritz Wagner was tossed for Orlando and took a shot to the back of the head from Hayes and appeared to be briefly knocked out.

Jalen Duren finished with seven points and 18 rebounds for the Pistons, who got 76 points from their bench, which has led the NBA in scoring in December.

Franz Wagner had 19 points for Orlando, which lost on back-to-back nights after winning eight of nine.

With 33 seconds left in the first half, Moritz Wagner hip-checked Hayes into the Pistons bench as they chased a loose ball. With Wagner facing the players on the Detroit bench, every Orlando player in uniform raced to the spot.

Wagner was ejected for a flagrant foul, while Hayes and Hamadou Diallo were ejected for their actions in the aftermath. Hayes got back up and struck Wagner in the back of the head, knocking him into the bench.

The Pistons led 66-47 at halftime, thanks to the contributions of the reserves, and Orlando was never able to get the lead back to single figures.

Magic: Franz Wagner, Cole Anthony, Wendell Carter Jr, Gary Harris and Mo Bamba were among the Orlando players who left the bench area during the confrontation at the end of the first half.

Pistons: Burks started the second half with Hayes having been ejected, leaving Detroit's second unit without two of its three top scorers. He was called for a flagrant 1 foul for an unsuccessful attempt to stop Mo Bamba from dunking late in the third quarter, leading to a five-point Magic possession.

Bojan Bogdanovic's 14 points gave him 9,787 in his career, 23 behind Toni Kukoč's record for a Croatian player.