Detroit owns the NBA’s worst record (7-28) but beat the reigning NBA champions and ended its recent futility in this series by getting a boost from the return of several players who had missed multiple games due to the NBA’s health and safety protocols.

Milwaukee had won 12 consecutive regular-season matchups with the Pistons by an average margin of 16.7 points before Monday. That streak didn’t include the Bucks’ four-game sweep of Detroit in a 2019 first-round playoff series.

The Bucks lost despite having their top three players – Giannis Antetokounmpo, Khris Middleton and Jrue Holiday – all available. This marked just the third time all season that the Bucks have lost when they’ve had all three of those players in the starting lineup. 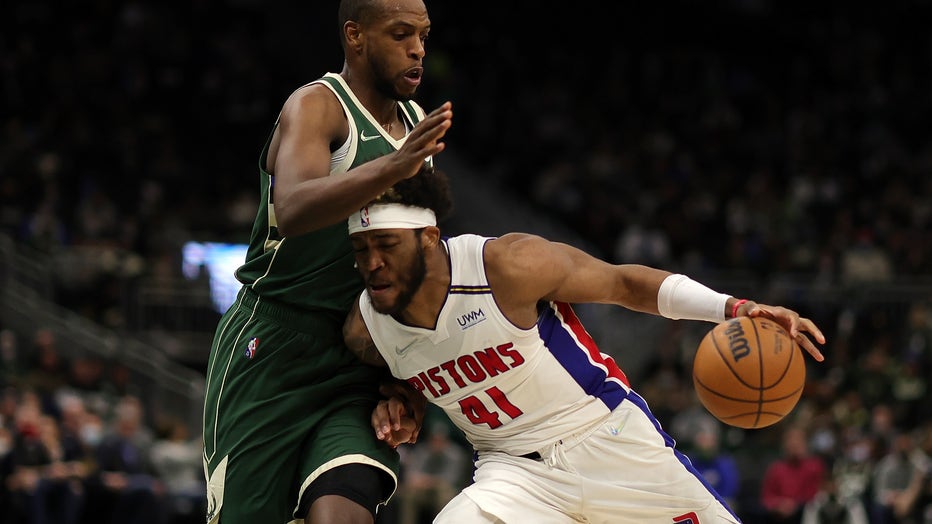 MILWAUKEE, WISCONSIN - JANUARY 03: Saddiq Bey #41 of the Detroit Pistons works against Khris Middleton #22 of the Milwaukee Bucks during the second half of a game at Fiserv Forum on January 03, 2022 in Milwaukee, Wisconsin. NOTE TO USER: User express

Milwaukee threatened to erase a 13-point deficit in the final two minutes. But after Holiday's 3-pointer narrowed the margin to five with 47.1 seconds left, Detroit's Cade Cunningham converted a putback of his own miss with 27.8 seconds remaining.

Josh Jackson scored 24 points, Cunningham had 19 and Trey Lyles added 11 as all three Pistons came back from health and safety protocols. Killian Hayes, Saben Lee and Rodney McGruder also were back from protocols.

The Bucks led 64-61 at halftime after going on a 15-3 run late in the second quarter, but the Pistons scored 13 straight points early in the third period to go ahead 74-67. Bey had a pair of 3-pointers and Cunningham provided a 3-pointer and a dunk during that surge.

Milwaukee went back ahead when Holiday drove the baseline and hit a reverse layup with 2:48 left in the third quarter, but Detroit responded again with an 8-0 run. And after the Bucks tied the score at 90-all with 10:12 remaining, the Pistons scored seven consecutive points to go in front for good.

Pistons: This marks the second time in a week that Bey has established a career high in scoring. He had 32 against the New York Knicks on Wednesday. ... Jackson's 24 points were a season high. ... Cory Joseph and Isaiah Stewart remained unavailable because of league protocols.

Bucks: Middleton returned after missing a victory over the New Orleans Pelicnans on Saturday for personal reasons. ... Luke Kornet signed a 10-day contract with the Bucks under the NBA’s hardship allowance. The 7-foot-2 center played two games with the Cleveland Cavaliers on a 10-day contract earlier this season and also has played 10 games for the NBA G League’s Maine Celtics. … Jordan Nwora was unavailable due to the protocols two nights after scoring 23 points and shooting 5 of 7 from 3-point range. Reserve forwards Thanasis Antetokounmpo and Semi Ojeleye remained unavailable due to league protocols

Pistons: Visit Charlotte Hornets on Wednesday. The Pistons have lost their last 13 meetings with the Hornets.