Detroit was 2 of 5 on power plays. 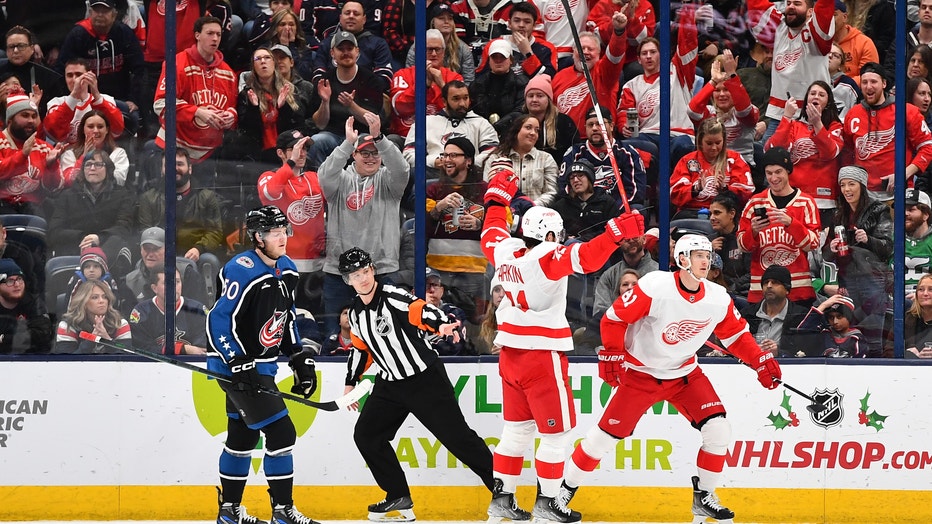 COLUMBUS, OHIO - DECEMBER 4: Teammates Dylan Larkin #71 and Dominik Kubalik #81 of the Detroit Red Wings celebrate a goal during the first period of a game against the Columbus Blue Jackets at Nationwide Arena on December 4, 2022 in Columbus, Ohio. (

Czarnik started the scoring at 6:34 of the first, redirecting a centering pass from Jonatan Berggren.

"The biggest thing for us is just get our feet moving and create energy for our lines and for our team," Czarnik said. "If we are able to do that, we’re effective, and so far, we’ve been able to."

Kubalik next made it 2-0 with a power-play goal off a one-timer from the right circle with 2:24 left in the period. Raymond beat Korpisalo from just outside the crease at 7:03 of the second, with eight seconds left on a two-man advantage.

"We need the power play," Detroit coach Derek Lalonde said. "We’re not built to score four or five. You see at times we struggle at 5-on-5 offense. Now we turn a 1-0 first period, in which we played pretty well, into a 2-0, probably a big difference in the game."

Bjork put Columbus on the board with a power-play goal from between the circles late in the second.

Johnson’s goal 1:58 into the third period pulled Columbus within one, but Copp roofed a shot from Korpisalo’s stick side to extend Detroit’s lead to 4-2 at 6:08.

"Mentally, we were not plugged into this one and you could tell," Blue Jackets coach Brad Larsen said. "It snowballed the wrong way for most of the game for us.

"We caught a little momentum there at the end of the second then into the third we score and we’re coming then they get that fourth goal, which is a tough one."

The Red Wings have 22 goal scorers this season, one more than Columbus for most in the NHL.

With two assists on the night, Hronek has recorded five multi-point effort in his last seven games. He also has six goals and eight assists in his last 10 games.

Gaudreau’s assist on Johnson’s goal was his 72nd in the 2022 calendar year, tied with Connor McDavid for the most in the NHL.

Detroit’s Tyler Bertuzzi had surgery on his hand and will miss about six weeks. Columbus defensemen Jake Bean and Zach Werenski both underwent surgery to repair torn labrums. Bean is expected to miss 4-6 months. Werenski will miss an estimated 6 months and has been placed on long-term injured reserve.

The Blue Jackets game at Nashville, postponed from Nov. 26 due to arena issues, was rescheduled for Jan. 17.