DETROIT - Sam Gagner scored to end an eight-round shootout and Thomas Greiss stopped 33 shots, lifting the Detroit Red Wings to a 1-0 win over the Tampa Bay Lightning on Saturday.

The defending Stanley Cup champion Lightning were in control all afternoon, but it didn't show up on the scoreboard in regulation or overtime.

"We did everything we could to win that game," Tampa Bay coach Jon Cooper said. "I’ll take that game all over again. Tip your hat to the goaltenders, including ours."

In the shootout, both teams scored with their first two shooters before four in a row were denied. Greiss stopped just enough shots in the shootout to help his rebuilding and banged-up team beat one of the best in the league. 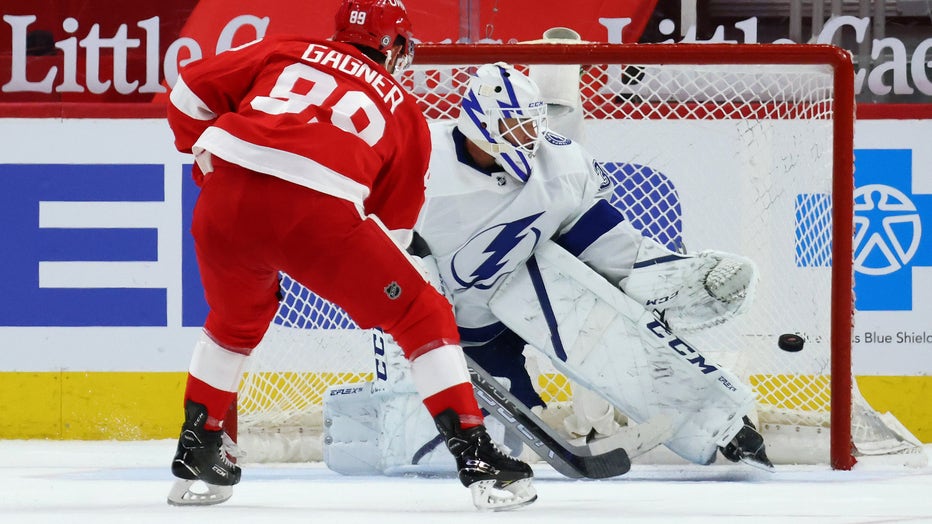 DETROIT, MICHIGAN - MAY 01: Sam Gagner #89 of the Detroit Red Wings scores the game winning shoot out goal past Curtis McElhinney #35 of the Tampa Bay Lightning at Little Caesars Arena on May 01, 2021 in Detroit, Michigan. (Photo by Gregory Shamus/Ge

Detroit's defense was stingy throughout the game, including early in the first when Danny DeKeyser lay on the ice to take away a scoring chance.

"We’re not playing for the playoffs, but we had guys laying out to block shots with three games left," coach Jeff Blashill said.

When the pucks did get past the Red Wings' skaters, Greiss stopped them with some impressive kick and glove saves.

Tampa Bay also missed opportunities such as Ondrej Palat failing to take advantage of having the puck and an open net at the end of an odd-man rush during a 4-on-4 situation.

"I got a couple big breaks where they had a 2-on-1 and couldn’t put the puck in the net," Greiss acknowledged.

It looked like the Lightning had finally broken the scoreless tie midway through the third period, but Palat made contact with Greiss to negate a goal that Detroit challenged successfully.

"I’m just trying to get in front of the goalie," Palat said. "I’m not trying to push him. I think the D-man pushed me."

Detroit was called for two penalties in a 14-second stretch late in the third, giving the Lightning a 5-on-3 power play and they still couldn't take advantage.

"That was huge," Greiss said. "That’s a very talented team there and our penalty kill didn’t give them anything."

Tampa Bay could finish first, second or third in the Central, the only division that had more than one team with 70-plus points when play began on Saturday.

The Lightning are vying with Florida and Carolina for the top spot in the division with a little more than week left in the season.

"We still have a handful of games left before we jump into the real hockey," McElhinney said.

Tampa Bay goaltender Andrei Vasilevskiy, who earned 30 of the team's 34 wins, was not on the ice and Cooper would not say if he will play Sunday.

"We’ve got a plan for Vasilevskiy down the stretch," he said.

Detroit earned its 18th victory in Game No. 53, surpassing the number of wins it had during last year's 71-game season that was shortened by the pandemic and the team's place in the standings.

"We’re a much better hockey team than we were a year ago," Blashill said. "We’ve won bunch a lot of games with a lot of young guys in the lineup. We’re clearly a better defensive team. We’re giving our goaltenders chances to make more saves. We still don’t score enough, and that’s an issue."

Tampa Bay plays at Detroit on Saturday afternoon, shooting to take advantage of playing one of the NHL's worst teams before closing with playoff-contending Dallas at home and the Panthers on the road to perhaps decide the division.