DETROIT - Lucas Raymond had a goal and an assist, and the Detroit Red Wings scored three times in the first 3 1/2 minutes of the third period to beat the Ottawa Senators 4-2 on Saturday night.

Elmer Soderblom had the go-ahead goal for the Red Wings, who trailed 2-1 entering the final period. Pius Suter and Michael Rasmussen also scored, while Magnus Hellberg made 20 saves. 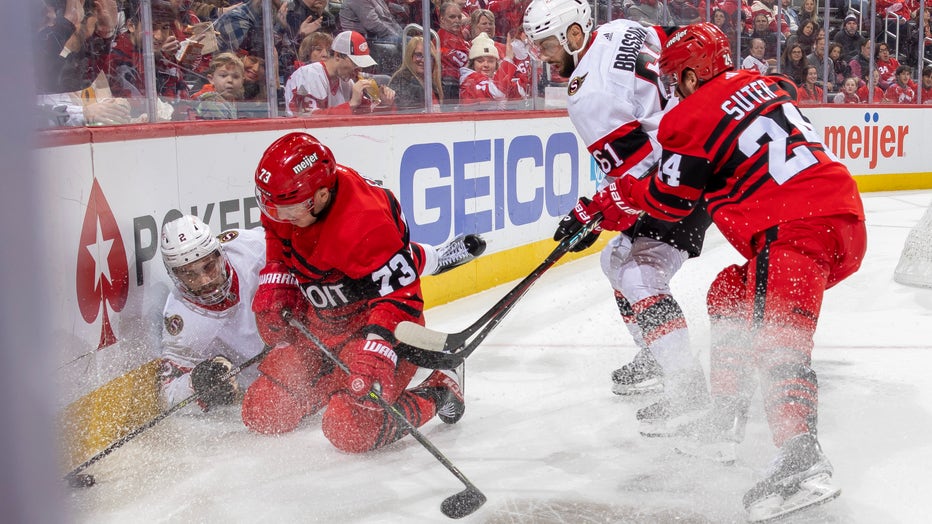 DETROIT, MI - DECEMBER 31: Adam Erne #73 and Pius Suter #24 of the Detroit Red Wings battle in the corner with Artem Zub #2 and Derick Brassard #61 of the Ottawa Senators during the first period an NHL game at Little Caesars Arena on December 31, 202

Drake Batherson extended his point streak to 13 games for Ottawa with a first-period assist. Alex DeBrincat, who also had an assist in the first, has at least one point in 13 of the last 14 games.

The Senators grabbed a 2-0 lead in the opening period.

Watson scored his third goal on a wrist shot from the slot. Giroux got his 15th when he flipped a backhand over Hellberg's right shoulder.

Detroit scored the only goal of the second when Suter converted a behind-the-net feed from Raymond for his fifth goal.

Raymond wound up serving six penalty minutes later in the period but Ottawa was unable to extend its lead.

The Red Wings took the lead with three goals in the first 3:13 of the third.

Raymond scored his ninth goal by redirecting Olli Maatta's shot from the point. Soderblom scored his fifth with a drive from the edge of the left circle. Talbot then committed a turnover while trying to pass the puck from behind the net. Rasmussen turned the giveaway into his seventh goal and a 4-2 Detroit lead.

NOTES: Ottawa won the previous five meetings. ... DeBrincat has 27 points in 18 career games against Detroit, while Giroux has 31 points in 31 games. ... Red Wings G Ville Husso was inactive for the second straight game with an illness. ... It was the 66th time the Red Wings hosted a New Year's Eve game. They have won 34 of them.