LAS VEGAS - Detroit's defense did its part Thursday night, forcing Vegas to shoot from the point and the wall.

Then goalie Ville Husso did the rest, making 33 saves as the Red Wings snapped a three-game losing streak with a 3-2 victory over the scuffling Golden Knights.

Husso allowed just one even-strength goal. Vegas scored on a 6-on-5 with 41.5 seconds left when Jack Eichel's shot went in off William Karlsson. Reilly Smith picked up the secondary assist for his second point of the night.

"Unfortunately, they got a lucky, lucky bounce at the end, but overall it was a really good effort," Husso said. "There were a couple of shots from the blue line and all the angles, and guys boxed out well. It was not easy, but one of the nicer nights to play as a goalie." 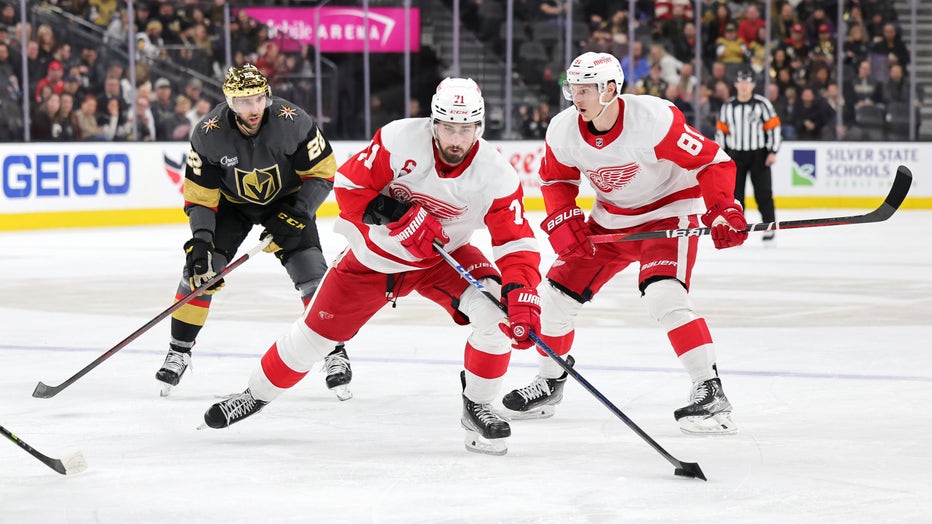 LAS VEGAS, NEVADA - JANUARY 19: Dylan Larkin #71 of the Detroit Red Wings skates with the puck ahead of Michael Amadio #22 of the Vegas Golden Knights and Dominik Kubalik #81 of the Red Wings in the third period of their game at T-Mobile Arena on Jan

Lucas Raymond, Dominik Kubalik and Joe Veleno scored for the Red Wings, who had lost six of eight. That included blowing a two-goal lead in the third period of a 4-3 shootout loss Tuesday at Arizona.

"We just managed our game better," coach Derek Lalonde said. "It’s a frustrating group at times because you see moments of us playing extremely well and for the majority of time. We're finding ways to not manage the game correctly and not get the results. And tonight, from start to finish, something like this will certainly boost our confidence."

Detroit faced a Golden Knights team trying to find its way since captain Mark Stone left with an upper-body injury Jan. 12 against Florida. Vegas has lost a season-high three in a row and four of five while struggling to hold off surging Seattle, which caught the Knights on Thursday night to tie for first in the Pacific Division with 58 points.

The Kraken, who have won eight of 10, have a game in hand.

"You go through stretches of the year where it’s not going to go your way," coach Bruce Cassidy said. "We’re prepared, patience, stay in the game, urgency until it does go your way and you're not chasing (the lead). We'll keeping sending that message."

The Red Wings are closer to the bottom of the Atlantic Division standings than the top, but they were the sharper team in this one. They used pinpoint passing to set up all three goals in the first two periods in taking a 3-1 lead.

It was a collective effort; no Detroit player had more than one point.

The Red Wings struck early, scoring 2:45 in when Dylan Larkin delivered a beautiful pass to Raymond in front. That assist extended Larkin's point streak to six games (two goals, six assists) and left him one point short of 400 in his career.

The Knights answered late in the first period when Nic Hague passed from the right point to Pietrangelo, who fired a shot from above the left circle. That goal with 36 seconds left kept Vegas from going scoreless over five consecutive periods.

Detroit scored twice in the second. Oskar Sundqvist set up Kubalik for the go-ahead goal on a power play, and Jordan Oesterle's pass to Veleno put the Red Wings ahead 3-1.

NOTES: Detroit left wing Tyler Bertuzzi (lower body) was injured in the second period, but Lalonde said he didn't think it was serious. ... Vegas defenseman Alec Martinez (illness) was back on the ice after leaving in the second period Monday against Dallas. ... Red Wings defenseman Filip Hronek got his 150th career point with a second-period assist. ... Eichel, who has 15 goals and 33 points this season, has gone three games without a goal and has put the puck in the net once in five games.