Rookie quarterback Dwayne Haskins picked up his first NFL win after leading Washington (2-9) into field goal range following Dunbar’s interception. Haskins finished 13 of 29 for 156 yards and an interception but made a couple fewer mistakes than Driskel, who was picked off three times as the Lions (3-7-1) lost their fourth in a row and third since starter Matthew Stafford went out with injury.

For long stretches, the game was a comedy of errors with neither team looking like it wanted to win. Haskins fumbled on third down on Washington’s first possession, Detroit turned the ball over on consecutive offensive plays, Lions kicker Matt Prater missed a 39-yard field goal and his teammates were baffled on Steven Sims’ 91-yard kickoff return for a Redskins touchdown - after muffing the catch.

Driskel finished 20 of 32 for 207 yards, with a touchdown pass and the three interceptions. 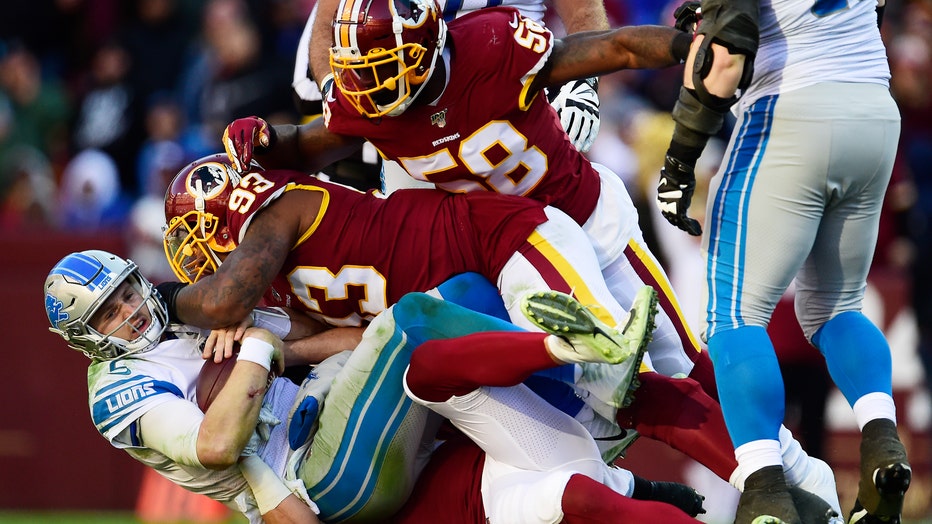 LANDOVER, MD - NOVEMBER 24: Jeff Driskel #2 of the Detroit Lions is sacked by Jonathan Allen #93 and Ryan Kerrigan #91 of the Washington Redskins in the second quarter at FedExField on November 24, 2019 in Landover, Maryland. (Photo by Patrick McDerm

Redskins cornerback Josh Norman was in uniform but only saw the field on special teams. After multiple reports Sunday morning that he’d be inactive, it was a bit of surprise Norman played at all.

“Where you are today isn’t the determining factor of where you’ll be tomorrow,” Norman tweeted before the game. “But Everyday is its own starting point to create a dynasty that’ll last when you’re gone.”

Norman has drawn his share of criticism during a rough season, his fourth since signing a $75 million, five-year deal with Washington. Defensive coordinator Greg Manusky said he “couldn’t tell you why” Norman has struggled.

“I think from our situation, we're putting him in situations to make some plays, and we're just not making the plays,” Manusky said this week.

In a game of inept offenses, special teams shined for the Redskins and Lions. In addition to Sims’ kickoff return TD that was Washington’s first since 2015, Hopkins made field goals of 28, 37 and 42 yards before the go-ahead score and Prater connected from 24, 49 and 21 yards.

Quarterback-turned-tight end Logan Thomas made his first touchdown catch with the Lions, a 12-yard reception from Driskel, with family and friends in attendance. Thomas is a native of Lynchburg, Virginia, about a three-hour drive away, and played QB at Virginia Tech.

Lions: DT Damon Harrison was injured late in the fourth quarter. ... WR Marvin Hall left early in the fourth with a foot injury. ... Stafford was one of six starters out with injury.