Rodgers’ poor pass intended for left tackle David Bakhtiari on a fourth down was picked off by rookie Aidan Hutchinson. It was one of several plays the four-time NFL MVP wished he had back.

Rodgers matched a career high with three interceptions and threw an incomplete pass on fourth down from the Detroit 17 in the final minute, letting the Lions hold on for a 15-9 win over the Green Bay Packers on Sunday in a matchup of slumping teams. 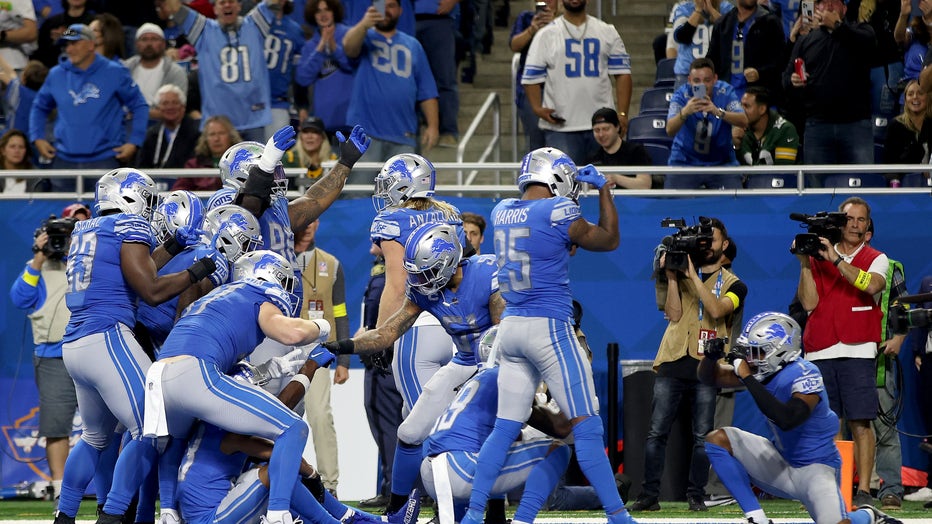 DETROIT, MICHIGAN - NOVEMBER 06: Detroit Lions celebrate a interception by Kerby Joseph #31 in the third quarter of a game against the Green Bay Packers at Ford Field on November 06, 2022 in Detroit, Michigan. (Photo by Mike Mulholland/Getty Images)

When Rodgers was asked why he still believes this team can turn it around, he looked down at a lectern and had a long pause before answering.

"I’ve been counted out many times in my life as have many of my teammates," He said. "I hope we just dig deep and find a way. We will truly be underdogs for many games moving forward. Hopefully we can embrace that."

The Packers (3-6) have lost five straight for the first time since 2008, when Rodgers was a first-year starter.

"I would be concerned if I saw guys not competing out there," coach Matt LaFleur said.

Rodgers thought about retiring in the offseason after winning a second straight NFL MVP award, but he chose to keep playing and insisted he doesn’t regret it.

"When I decided to come back, it was all in," he said.

"I’m exhausted," said coach Dan Campbell, who won for the fifth time in 25 games in Detroit. "I want to go home, put my feet up and drink a beer."

Detroit tried to seal the victory late in the fourth when Campbell went for it on fourth-and-3 from the Green Bay 43. Jared Goff’s pass was incomplete.

Rodgers failed to take advantage. He did convert a fourth-and-2 with a lob to Samori Toure, who fumbled out of bounds at the Detroit 17.

Rodgers threw four straight incomplete passes to end a lousy game overall. He was 23 of 42 for 291 yards with a TD and had three interceptions for the fifth time in his career.

On the field and the sideline, Rodgers looked and sounded upset with his teammates.

"It’s disappointing and frustrating, but yeah, I think that we all probably could do a little bit better job of controlling that frustration," LeFleur said.

Goff was 14 of 26 for 137 yards with touchdown passes to Shane Zylstra and James Mitchell, a pair of tight ends that took advantage of an increased role after Detroit dealt Hockenson to Minnesota.

Zylstra and his brother, Brandon, who plays wide receiver, were elevated from the practice squad to join the active roster Sunday.

Rodgers threw interceptions in the end zone on his first two possessions. Kerby Joseph picked off the first one on a deflected pass and Hutchinson intercepted the next one.

"He told me he gave me a gift," Hutchinson said.

Campbell made a call on Green Bay’s next possession that panned out, winning a challenge that overturned a Green Bay catch on fourth down.

Detroit took advantage, breaking a scoreless tie with Goff’s 1-yard touchown pass to Zylstra early in the second quarter. Jamaal Williams ran for a 2-point conversion after a running-into-the-kicker penalty.

Goff threw an interception early in the third quarter and Rodgers gave it back two snaps later, getting picked off at the Lions 3 by Joseph again.

Rodgers responded with a 20-yard touchdown pass to Allen Lazard, but his 2-point conversion pass to him was broken up by Jeff Okudah, allowing the Lions to lead 8-6.

Green Bay stalled at the Lions 7 on the ensuing drive and had to settle for Mason Crosby’s 25-yard field goal that cut its deficit to six midway through the fourth quarter.

Lions: Joseph was briefly evaluated on the field after he and CB Jeff Okudah collided with a helmet-to-helmet hit early in the fourth quarter. RB Craig Reynolds (ribs) was hurt during the game and starting WR Josh Reynolds (back) was inactive.

Lions: Play at Chicago on Sunday.