PISCATAWAY, N.J. - Michigan State coach Tom Izzo told his Spartans that one of the keys to beating Rutgers was to not let the Scarlet Knights get going offensively.

Paul Mulcahy had his first-career double-double with 15 points and a career-high 12 assists, Ron Harper Jr. added 17 points and Rutgers routed No. 13 Michigan State 84-63 on Saturday.

Cliff Omoruyi also had 17 points on 6-of-6 shooting, while Dean Reiber added a career-high 12 points and Caleb McConnell had 11 points, nine rebounds and four steals for the Scarlet Knights (13-9, 7-5 Big Ten).

"We were playing in rhythm. We were taking good shots, good quality shots. It wasn’t a lot of iso(lation)," Mulcahy said. "We got really talented guys." 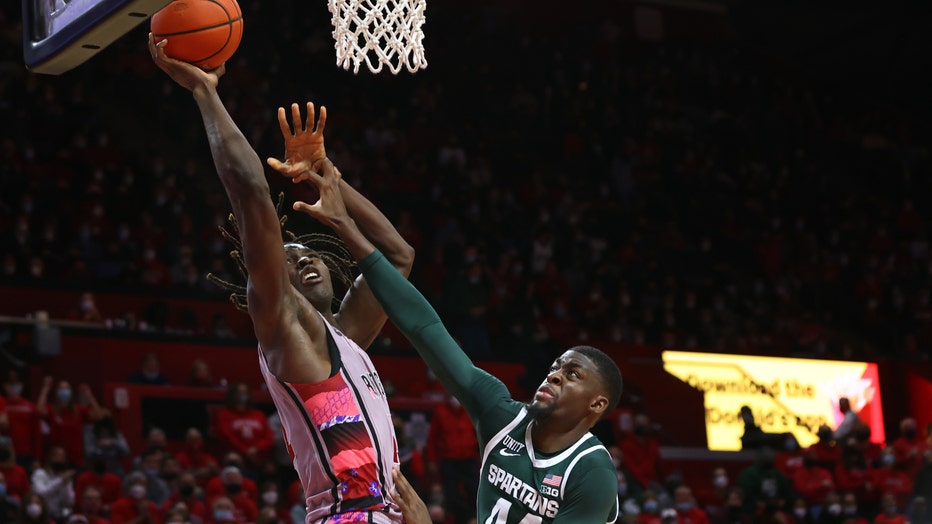 PISCATAWAY, NJ - FEBRUARY 05: Clifford Omoruyi #11 of the Rutgers Scarlet Knights attempts a layup as Gabe Brown #44 of the Michigan State Spartans defends during the second half of a game at Jersey Mike's Arena on February 5, 2022 in Piscataway, New

Izzo received a technical foul early in the second half and the Rutgers crowd lit up. Harper went to the line to hit the technical free throws and give Rutgers its largest lead of the game at the point, 47-38 with 17:41 left.

"It was a physical game. I probably deserved a technical and I’d get another one," Izzo said, adding, "I didn’t sweat at them, as you know. I just kind of ran down the court. I guess these guys don’t like that, and rightfully so."

Rutgers led by as much as eight in the first half before Michigan State tied it at 28 on a Bingham layup with 4:26 to go. The Scarlet Knights regained the lead a minute later on a nice pass in transition from Mulcahy to Harper for a layup and went into the break up just 40-38.

"I wasn’t loving the first half as far as our defense was concerned," Rutgers coach Steve Pikiell said. "I thought we played really good defense in the second half. We turned the ball over like we did in the past. But, rebounding is always what we try to emphasize and especially against this team rebounding- wise."

Rutgers, which outrebounded the Spartans 31-20, scored the first seven points of the second half and pulled away.

"That was an old-fashioned butt kicking," Izzo said.

After squeaking by Maryland and suffering an ugly loss at Rutgers, Michigan State will tumble in the polls.

Michigan State: With a month to go in the regular season, the Spartans find themselves in a familiar position. Picked to finish sixth in the Big Ten, Hall of Fame coach Tom Izzo once again has the Spartans competing for a conference title and a high seed in the NCAA Tournament.

Rutgers: The Scarlet Knights have their work cut out to make it back to the NCAA Tournament after breaking a 30-year drought last season. Rutgers had been trending toward the NIT before Saturday’s big win. With a gauntlet of a schedule that includes No. 16 Ohio State, No. 18 Illinois, a home-and-home with No. 11 Wisconsin, and at No. 4 Purdue, there are plenty of chances for resume-building wins.

"There’s not one team in the NCAA Tournament right now," Mulcahy said. "We’re going to compete. We’re not going to worry about the past or the future."