DETROIT - Anthony Duclair and his teammates wanted to make sure D.J. Smith got a win in his first game as a head coach in the area where he grew up.

Duclair had two goals and an assist, and the Ottawa Senators held on to beat the Detroit Red Wings 4-3 Tuesday night.

Smith grew up in Windsor, Ontario, which is across the Detroit River from Detroit. He regularly attended Red Wings games at their former home, Joe Louis Arena.

“We knew it was huge for his first game as a head coach in his hometown so the boys really wanted to give him two points in front of his family,” Duclair said.

“The Duke (Duclair) is a dangerous player and he took advantage of that tonight,” Smith said. “He's been good all year for us.”

John Gabriel Pageau and Brady Tkachuk also scored for Ottawa. Anders Nilsson made 35 saves, including 15 in the third period when the Senators were outshot 16-3. 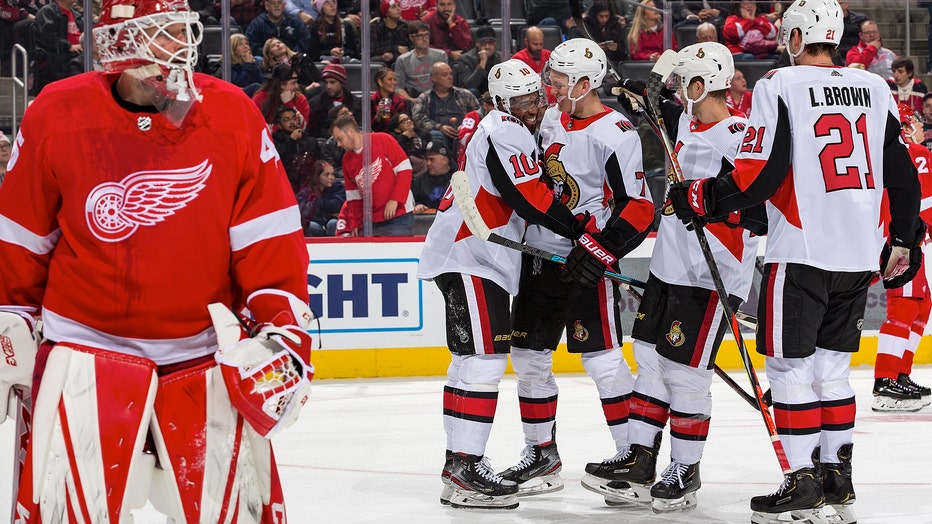 “This is the most opportunity I've had in the NHL,” said Duclair, who has nine goals and 13 points in 21 games. “And I have to thank D.J. and the coaching staff for giving me this chance.”

The Senators are the 24-year-old Duclair’s fifth team.

Valtteri Filppula had a goal and an assist, and Robby Fabbri and Anthony Mantha scored for Detroit, which ended a five-game point streak (3-0-2). Defenseman Filip Hronek had two assists and Jonathan Bernier stopped 29 shots.

Mantha scored with 2:46 left and Bernier pulled for the extra attacker to make it 4-3. It was his 12th goal.

The Senators scored three goals in a 5:22 span in the second period to take a 4-2 lead.

Duclair got his second goal of the game and ninth of the season five minutes into the middle period to tie it at 2. Pageau scored on a breakaway 57 seconds later for his 12th goal, and Tkachuk scored off a feed from Duclair at 10:22 to make it 4-2.

“We were terrible in the second period. We came out and played fairly good in the first; it was a weird period,” Red Wings coach Jeff Blashill said. “We played obviously real good in the third, but it was too late. You can’t come out and have that period in the second.”

Duclair gave the Senators a 1-0 lead 3:08 into the game with his first goal of the night.

Fabbri tied it at 9:57 of the first when his shot from the right circle trickled through Nilsson and was accidentally kicked in by Ottawa’s Logan Brown. It was Fabbri’s fourth goal. Filppula’s short-handed goal with 1:28 remaining in the opening period gave the Red Wings a 2-1 lead. It was his third.

Hronek appeared to tie it 34 seconds after Duclair’s first goal, but the Senators challenged the play was offside. Replays showed that Tyler Bertuzzi was offside along the right boards.

NOTE: Ottawa RW Max Veronneau made his season debut after being recalled from AHL Belleville on Monday. ... Hronek returned after missing two games with a leg injury. ... Red Wings D Mike Green left the game with an upper-body injury. ... Detroit F Darren Helm left after the second period with a lower-body injury. ... Hockey Hall of Fame member and former Red Wings and Senators goaltender Dominik Hasek was at the game. He won two Stanley Cups with Detroit. He was saluted on the jumbotron during a play stoppage in the first period