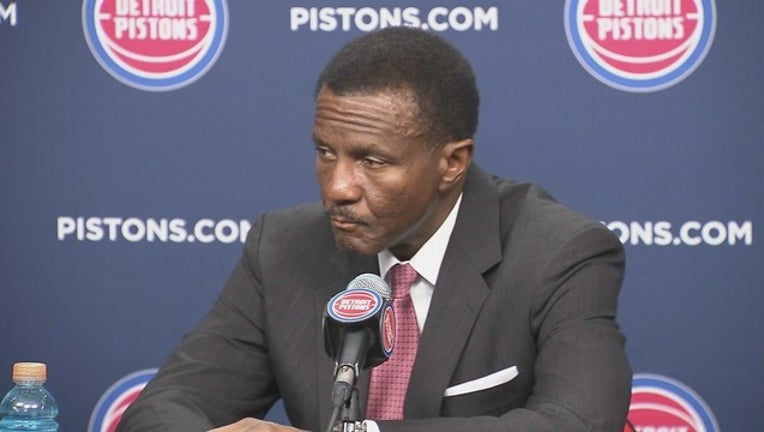 CLEVELAND (AP) - The Cleveland Cavaliers squeaked by without Kevin Love.

The Detroit Pistons, playing without Blake Griffin, weren't as fortunate.

The Cavaliers made clutch shots down the stretch for a 126-119 win Monday night in a game that featured six ties and five lead changes in the fourth quarter.

Collin Sexton scored 27 points, including the go-ahead 3-pointer with just under two minutes to play, and the Cavs defeated a Pistons squad that is fighting for a playoff spot in the Eastern Conference.

Detroit coach Dwane Casey, whose team beat Toronto on Sunday, was unhappy following the game, especially with the fact that Cleveland shot 58 percent.

"I'm totally disappointed in myself and our team and everyone in our locker room," he said. "Our defensive disposition was nil. Nil."

The Pistons (36-34) are sixth in the East, a game ahead of Brooklyn and 2 1/2 in front of Miami, but their previous visit to Cleveland - when they routed the Cavaliers 129-93 on March 2 - might have played a role in this loss.

"I don't think we came out with a healthy enough respect for our opponent - and we should have," Casey said. "Until we grow up and understand there are no nights we can take for granted in this league, we're not going to be ready for this playoff push."

Love was out with a sore back for Cleveland after taking a hard fall in Saturday's loss to Dallas, while Griffin sat out to rest for Detroit.

Andre Drummond nearly made up for Griffin's absence with 21 points and 21 rebounds, but Detroit's center was also displeased with the outcome.

"We tip-toed around with them the whole game, and they went out and took advantage of it," he said.

Detroit's Reggie Jackson missed a 3 before Sexton knocked down another shot from behind the arc with 39 seconds left to make it 121-114 and complete a 10-0 run.

"Those are the moments people remember - end of the game and you make a big shot," Sexton said.

Cleveland placed seven players in double figures. Osman had 21 points and Nik Stauskas scored 17, including 15 in the fourth.

"We made some tough shots and some clutch shots," Osman said. "We had a really good night."

Drummond has had 12 games with at least 20 points and 20 rebounds this season.

Casey is monitoring Griffin's workload as the Pistons begin a five-game road trip that will take them to the West Coast. Griffin scored 25 points in 33 minutes Sunday.

Drummond has 33 games of at least 15 points and 15 rebounds this season, breaking the franchise record previously held by Hall of Famer Bob Lanier, who did it 32 times in 1972-73.

Drummond wasn't paying much attention to the accomplishment.

"Nah, I'd rather we won," he said. "Winning the game is more important than any individual accolade."

Drew thought it was gratifying to see Sexton and Osman hit big shots with the game on the line.

"Those guys have come a long way and you can certainly see the growth in their games," Drew said. "It tells me these guys are starting to get it."