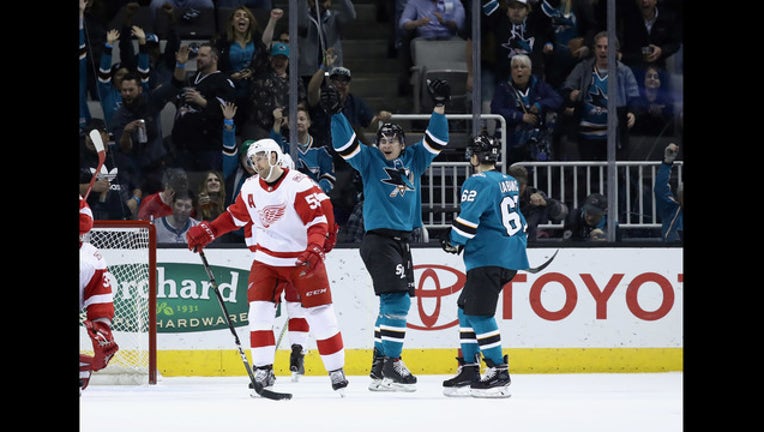 SAN JOSE, CA - MARCH 12: Timo Meier #28 of the San Jose Sharks celebrates after he scored on Niklas Kronwall #55 and the rest of the Detroit Red Wings at SAP Center on March 12, 2018 in San Jose, California. (Photo by Ezra Shaw/Getty Images)

SAN JOSE, Calif. (AP) - The San Jose Sharks ended their longest homestand of the season on a high note and now look to carry that forward on the road as they seek to solidify a playoff berth.

Eric Fehr scored his first goal with San Jose and the Sharks closed a six-game homestand by handing the Detroit Red Wings their seventh straight loss, 5-3 on Monday night.

"We understood that if we win this game it would be a pretty successful homestand," said captain Joe Pavelski, who had two assists. "That's what we did. Now we can leave with a little momentum and take this game on the road."

Joonas Donskoi, Kevin Labanc and Timo Meier also scored to help the Sharks win for the fourth time on the homestand and remain in second place in the Pacific Division with a two-point lead over Los Angeles. Chris Tierney added an empty-net goal to seal it.

Martin Jones made 23 saves for the Sharks, who start a three-game Canadian road trip on Wednesday in Edmonton.

"This was an important win for us," coach Peter DeBoer said. "Obviously we got a tough schedule coming up. We go on the road and some tough buildings. It was important we got the win tonight. We did enough to get the win. It wasn't a textbook game, but we did a lot of good stuff."

"We have to limit our mistakes," Howard said. "If we're going to be successful out there we can't make the mistakes that we do because they kill us."

Fehr gave the Sharks the lead for good during a long delayed penalty in the first period. With San Jose having the extra attacker, Fehr got in front of the net, where he deflected Brenden Dillon's point shot past Howard for his first goal in eight games with the Sharks since being acquired from Toronto last month.

The Sharks made it 3-1 early in the second when Labanc poked in a rebound after Howard stopped Tierney on a breakaway.

The Red Wings made it a one-goal game later in the second when Tyler Bertuzzi deflected a shot off the post and Nyquist knocked it in off the goal line.

Detroit appeared to get the equalizer on the power play later in the second but Anthony Mantha's goal was immediately waved off because he redirected it into the net with his skate.

The teams then traded goals early in the third, with Meier scoring on the power play when he deflected a shot from Mikkel Boedker and Zetterberg answering for Detroit off a nice pass from Nyquist.

That goal moved Zetterberg into sole possession of fifth place for the Red Wings with his 336th, breaking a tie with Ted Lindsay.

"Ted means a lot to me, so passing him and doing it in this building too where I played my first NHL game is really special," Zetterberg said.

The Sharks looked flat at the start in a game that meant much more to them than the Red Wings, who are 15 points out of playoff position. But Detroit took seven of the first eight shots on goal and led 1-0 after Daley took a pass from Zetterberg in the slot and beat Jones.

The momentum shifted after San Jose killed a penalty and the Sharks took the lead with a pair in a span of less than two minutes. The first came off the rush, when Evander Kane took a cross-ice pass from Pavelski and slid it back across the crease to Donskoi, who tapped it into the open net for his 14th goal.

"There was some of the talk when it happened of 'Get this kill and get a little momentum going,'" Pavelski said. "The game wasn't going well at that point so it was huge for us to come back."

NOTES: Bertuzzi had three assists. ... The Sharks allowed the first goal in five of six games on the homestand.