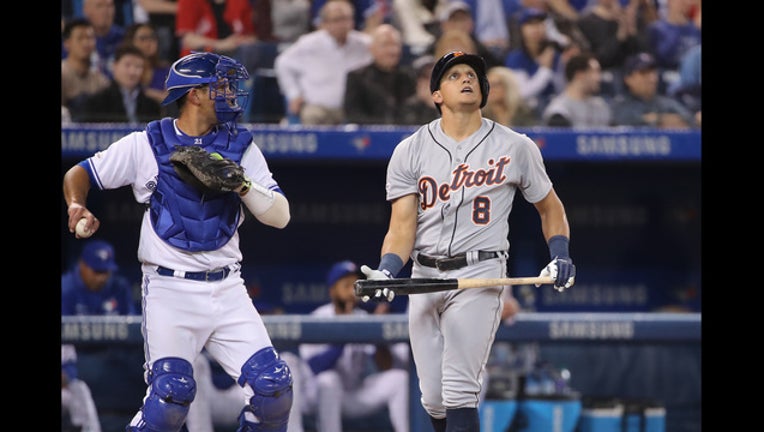 TORONTO, ON - MARCH 29: Mikie Mahtook #8 of the Detroit Tigers reacts after striking out in the eighth inning during MLB game action against the Toronto Blue Jays at Rogers Centre on March 29, 2019. (Photo by Tom Szczerbowski/Getty Images)

TORONTO (AP) - Through chattering teeth, Charlie Montoyo talked about how good it felt to win for the first time as a major league manager.

After Matt Shoemaker and the Blue Jays beat Detroit 6-0 Friday night, Toronto players marked their new skipper's milestone victory by bundling him into a laundry basket, dragging him into the showers and dousing him with beer.

"He got about 50 or 60 cold ones all at the same time," winning pitcher Matt Shoemaker said. "It was awesome."

The frosty bath left Montoyo soaking wet and more than a little chilly in his postgame news conference.

"I'm freezing," Montoyo said as he took his place at the podium.

Montoyo spent 18 years as a minor league manager and another four as a big league coach with the Tampa Bay Rays before being hired to replace John Gibbons in Toronto.

"Now I can retire, I have a win at every level," he joked.

Matt Shoemaker pitched seven sharp innings and Justin Smoak and Freddy Galvis each drove in two runs, a day after the Blue Jays were blanked in a 10-inning loss.

Shoemaker (1-0) allowed two hits, walked two and struck out seven. The right-hander signed a one-year deal with Toronto over the winter after spending his first six seasons with the Angels.

"He shut us down," Detroit manager Ron Gardenhire said.

"He had good action with his fastball, his slider was really good, and the split, too," Hicks said.

After establishing a team record for futility with a 13-inning scoreless drought to begin the season, the Blue Jays broke through with a four-run fourth. Teoscar Hernandez broke the skid with an RBI single, and Billy McKinney scored from first when center fielder Mikie Mahtook bobbled a bases-loaded single by Galvis.

Mahtook also failed to corral Brandon Drury's leadoff triple in the first inning, although Boyd struck out the next three batters. Those were the first in a stretch that saw Boyd fan seven of nine.

Gardenhire said miscommunication was to blame for Detroit's defensive miscues.

"We had that a couple of times," he said.

Smoak made it 6-0 with a two-out, two-run single off Blaine Hardy in the seventh.

Detroit's Nicholas Castellanos was left stranded after a one-out double in the fourth, then got caught in a rundown after reaching on a one-out triple in the sixth.

"He kind of hesitated and when he did that, now you've got a mess," Gardenhire said.

Castellanos was the only Tigers player to get a hit.

"Four hits in two games, that's not going to score you a lot of runs," Gardenhire said. "We'll get there."

Toronto's three shutouts in 2018 were the second fewest in the majors. Only Detroit (two) had fewer. The Tigers were blanked an MLB-leading 18 times last year.

Shoemaker, who was born and raised in suburban Detroit, said he always enjoys facing his boyhood team.

"I grew up a Tigers fan" he said. "Cecil Fielder was my guy growing up. It's a little different excitement pitching against your hometown team."

A former Blue Jays prospect, Boyd joined to the Tigers in the deal that sent left-hander David Price to Toronto in July 2015.

Tigers: Minor league RHP Franklin Perez, one of Detroit's top pitching prospects, is expected to miss four to six weeks because of tendinitis in his right shoulder. Perez missed much of 2018 because of shoulder and back injuries. He was acquired from Houston in 2017 as part of the package for Justin Verlander.

Blue Jays: Montoyo said Toronto's starters will likely be limited to between 80 and 100 pitches per outing through the end of April.

Tigers: RHP Spencer Turnbull was 1-0 with a 1.80 ERA in five spring training games, including two starts.

Blue Jays: RHP Aaron Sanchez has a 1.50 ERA in seven career games against Detroit, four of them starts.